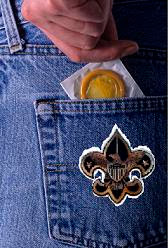 (Image by Unknown Owner)   Details   DMCA
Turning a hallowed institution into a Gordian Knot
It's time to get real: one of the most time-honored institutions in our country, (in the world, in fact) has had a history of child sexual abuse: the Good 'ole Boy Scouts of America. The extent of it has parents worried: do they need to prepare the kids with condoms? Or do they need to prepare the scout masters for some serious investigations?
From Conservative Babylon:

The gigantic scumbag -- and we do mean gigantic, at a reported six-foot-four and 400 pounds -- is Kenneth D. Tomlinson II, former police chief of Fredericktown, Missouri, firefighter, and Boy Scout leader.Said scumbag, we are very happy and relieved to report, just received life in prison -- actually, "three consecutive life terms plus plus 22 years" -- for sexually abusing two boys, ages 11 and 13, who were members of Tomlinson's Scout troop.

First, it was priests. Then it was youth pastors. Now it's boyscout leaders.

It's actually a kind of when-it-rains-it-pours situation: Our great friends at Conservative Babylon have been compiling/monitoring the antics of scout leaders (as well as former scout leaders) and the results during the last two weeks have really thrown us for a loop (or a knot, whatever).

There have been more than 2,000 US cases of abuse within the Boy Scouts of America prior to 1994 by Scout leaders, yet abuse is still occurring ...

That wiki entry is old and has not been updated since 2009. So to accentuate the problem, I've chosen seven of the most recent and salacious stories about scout leaders/oh-so-family-values men for the reader to ruminate about:

UPDATE: Wise has just been hit with 1,557 counts of possession of child pornography - enough to send him away for a very long time!

Besides being a Cub Scout Leader, Cimmino was a religion teacher for the First Congregational Church. He was originally charged with kidnapping and assault with intent to rape a child and eight counts of indecent assault and battery, all of which he pleaded not guilty. However, new charges arose from an alleged second victim. The case is still ongoing.

Stibal, a scout leader, was accused of molesting two boys during the span of years 2002 to 2008. Parents were concerned and shocked because he was also involved with children in the church and a school bus driver!

Hartman was a Boy Scout and Cub Scout leader when he was charge with aggravated sexual assault on both a 10-year-old boy and a 4-year-old girl. When the boy told his mother about the assault, his mother refused to believe him, hence when his school reported his bruises, child protective services removed him from his home and placed him an his siblings in foster care! The boy finally was able to set the record straight with the principal of the school.

Hoefling was a scout master at the Catholic church, Our Lady of Good Counsel when he was convicted 50. Hoefling is now serving his 3 to 20 for repeatedly molesting two 16-year-old boys in his troop

NOTE: As of this writing, nothing has been written about this case since January of 2009. This may be explained because of the position of Bartleson and his relation to Sen. John McCain.

Rev. Dan Vojir is has been writing/blogging on religion and politics for the better part of ten years. A former radio talk show host (Strictly Books " Talk America Radio Network) and book publisher, Dan has connected with some of the most (more...)
Related Topic(s): American Family Association; Boy Scouts Of America; Child Molestation; Family Values; John McCain; Sexual Predators; Vetting, Add Tags
Add to My Group(s)
Go To Commenting
The views expressed herein are the sole responsibility of the author and do not necessarily reflect those of this website or its editors.