From Aborigines to refugees, bashing the vulnerable wins votes in what is still a crudely racist country 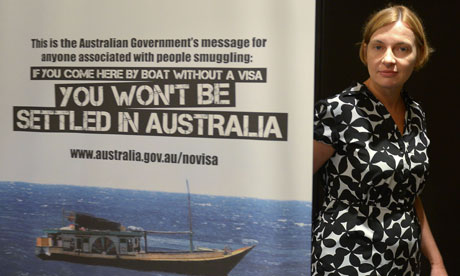 The election campaign in Australia is being fought with the lives of men, women and children. Some drown, others are banished without hope to malarial camps. Children are incarcerated behind razor wire in conditions described as "a huge generator of mental illness." This barbarism is considered a vote-winner by both the Australian government and opposition. Reminiscent of the closing of borders to Jews in the 1930s, it is smashing the facade of a society advertised as benign and lucky.

If a thousand Australians drowned in sinking boats in Sydney harbour, it would be a national tragedy. The prime minister would lead the nation in mourning; the world would offer condolences. By one measure, 1,376 refugees have drowned trying to reach Australia since 1998, many within range of rescue.

The policy in Canberra, known as "stop the boats," evokes the hysteria and cynicism of more than a century ago when the "yellow peril" was said to be about to fall down on Australia as if by the force of gravity. Last week the prime minister, Kevin Rudd, reached back to this era when he declared that no refugees in boats would be permitted to land in Australia. Instead, they are to be sent to concentration camps in impoverished Papua New Guinea, whose government has been suitably bribed.

Among them are people fleeing wars and their aftermath, such as Afghanistan and Iraq, for which Australia and its US mentor bear responsibility. Those who survive are made prisoners in a harsh gulag on the most isolated islands on earth. Women and children sent to equatorial Manus Island have had to be evacuated because of mosquito-infested conditions. Now Manus is to receive 3,000 more refugees who, denied legal rights, may spend years there. A former security guard on the island said: "[It's] worse than a prison actually ... Words can't really describe ... I have never seen human beings so destitute, so helpless and so hopeless ... In Australia, the facility couldn't serve as a dog kennel. Its owners would be jailed."

Australia is a signatory to the 1951 refugee convention. Rudd's cowboy actions are not only lawless but weaken international refugee law and the human rights movements that buttress it. In 1992 the Labor government of Paul Keating was the first to impose illegal mandatory detention of refugees, including children. Since then, governments have waged a propaganda war on refugees, in alliance with a media dominated by Rupert Murdoch. Vast, sparsely populated Australia demands "protection" from refugees and asylum seekers of whom fewer than 15,000 were settled last year -- 0.99% of the world's total.

The punitive, racist nature of the policy allows the Australian Security Intelligence Organization to "assess" people in secret and detain them indefinitely -- such as Tamils fleeing the civil war in Sri Lanka. They often have no idea why they are imprisoned, and have included children.

Clearly, Rudd hopes to be re-elected on this "fear card." British politicians play a similar game; but in Australia race is all but genetically inscribed, as in apartheid South Africa. The federation of the Australian states in 1901 was founded on racial exclusion and a dread of non-existent "hordes" from as far away as Russia. A 1940s policy of "populate or perish" produced a vibrant multiculturalism -- yet a crude, often unconscious racism remains an extraordinary current in Australian society and is exploited by a political elite with an enduring colonial mentality and obsequiousness to western "interests."

Rudd's banishment of refugees who come by sea is designed to wrong-foot his opponent: the Coalition leader, Tony Abbott, a Catholic fundamentalist. Labor restored Rudd to the leadership last month because Julia Gillard's unpopularity threatened to destroy the party at the polls and, with it, Australia's Westminster-style club of two major parties with mostly indistinguishable policies.

Rudd's move was nothing new -- bashing the vulnerable is said to win votes in Australia, whether they are refugees or Aborigines. His predecessor John Howard bashed both. Shortly before the 2001 election Howard claimed that people on a stricken boat had thrown their children into the sea, and could not possibly be "genuine refugees." Later it was revealed the "children overboard" story was a fabrication.

Two weeks before the next election, in 2007, Howard declared a state of emergency in the Northern Territory and sent the army into impoverished indigenous communities where, his minister Mal Brough claimed, paedophile gangs were abusing children in "unthinkable numbers." The Australian Crime Commission, the Northern Territory police and medical specialists who examined 11,000 children found his allegations to be false.

Although Howard failed to win this election, his vicious campaign of smear and dispossession -- he demanded Aboriginal people hand over the leasehold of their land -- succeeded in devastating whole communities that have yet to recover. A government review of what became known as the "intervention" found a "collective despair" among black Australians. The Australian Indigenous Doctors Association reported widespread hunger and starvation. Self-harm and attempted suicide quadrupled.

As opposition leader at the time, Rudd gave Howard full support. Later, as prime minister, he made an emotional public apology to the tens of thousands of Aboriginal Australians wrenched from the families during the 20th century, known as the stolen generation. Quietly, Rudd refused the victims compensation of any kind. Had they been white, he would not have dared. When I asked him why, he replied: "These questions should be dealt with over time." With a life expectancy among the lowest in the world, the victims have no time.

Labor has since allowed the assimiliationist cruelties for which Rudd apologized. In a one-year period to June last year, 13,299 impoverished Aboriginal children were taken from their families, more than in the infamous years of the stolen generation. They include babies seized from birth tables. "We believe another stolen generation is well and truly underway," Josey Crawshaw, director of a respected Darwin-based child support organisation, told me. "They are plucked from their communities often without explanation or any plan to return them, and are given to whites. This is social engineering in its most radical sense. It's horrific." For Aborigines and refugees, the irony is self-evident. Only Aboriginal people are true Australians. The rest of us -- beginning with Captain Cook -- are boat people.

Utopia, John Pilger's film on Australia, will be released in the autumn

John Pilger grew up in Sydney, Australia. He has been a war correspondent, author and documentary film-maker. He is one of only two to win British journalism's highest award twice, for his work all over the world. On 1 November, he was awarded (more...)
Related Topic(s): Aborigines; Australian Politics; Indigenous Cultures; Media; Propaganda; Refugees, Add Tags
Add to My Group(s)
Go To Commenting
The views expressed herein are the sole responsibility of the author and do not necessarily reflect those of this website or its editors.