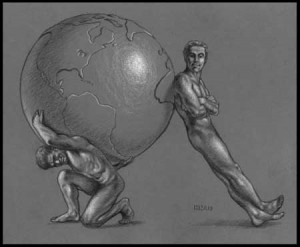 "The text of Otter's order includes language calling the law 'a dramatic attempt to assert federal command and control over this country's health care system.' It asserts that the measure constitutes an 'infringement on Idahoans and the authority of the state under the Tenth Amendment of the United States Constitution.' Otter's order states that 'no executive branch department, agency, institution or employee of the state shall establish or amend any program or promulgate any rule to implement any provisions' of the law."

In other words, no affordable health care for you, Idaho! Go pull yourself up with your boot straps and deal with your illnesses on your own.

Speaking of Ayn Rand-worshiping Neocons, seems Wisconsin has more than its fair share of these political ponerologists. Having successfully eliminated collective bargaining, Governor Scott Walker has turned his sights to the elderly, and is now working to eliminate the state's Senior Care program which provides affordable prescription drugs to senior citizens in Wisconsin. BusinessWeek reports:

"Walker's 2011-13 budget would require residents to enroll in a Medicare Part D insurance plan if applying for SeniorCare. Under this plan, SeniorCare only would cover gaps in the Medicare Part D coverage. Walker said the plan would save the state an estimated $15 million.

"SeniorCare, which serves 91,000 residents older than 65, now requires residents to pay an annual $30 fee and deductibles based on their average income. After the deductible, the program has a co-pay of $5 for generic drugs and $15 for brand-name drugs.

"Medicare Part D costs vary depending on insurance providers, but the average premium cost for Wisconsin plans is $44 a month."

Hey, these people are old, okay? They're not contributing anything, why should they get anything in return?  Let 'em take aspirin.

On a totally unrelated -- but not surprising -- matter, Scott Walker also wants to stop funding the state's curbside recycling program. There's a campaign slogan for ya' -- vote for Walker for polluting the environment, screwing the workers, and denying the elderly affordable medication!

And then comes Rep. Paul Ryan (R-WI) with a proposed budget plan that even his own Republican constituents hate.

"Rep. Paul Ryan, the face of the GOP's efforts to scale back the size of the federal government and trim the federal deficit, was booed by some Wisconsin constituents this week, but not for the reason you might think.

"Ryan's budget plan, as overwhelmingly approved by the House, would convert Medicare into a program which would provide seniors with subsidies to purchase private health insurance. But as Ryan returned home along with the other 240 Republican members to explain the budget blueprint to voters, he received heat not for the Medicare proposal, but for his call to cut taxes for wealthy Americans.

"Ryan's plan would lower the top tax rate to 25% while eliminating many of the shelter and loophole provisions in the tax code, which, he says, would help make up for the lost revenue. Polls have shown widespread support for increased taxes on the rich. And the response (booing) that greeted Ryan in Wisconsin shows that the battle over taxes, as well as the fight over the future of Medicare and other entitlements, are likely to play a major role in the 2012 elections."

Psssst . . . Teabaggers, listen up!  Ryan and Walker and Otter and their ilk are not your friends. They are undermining every social and political program that has protected your health, safety, and civil rights for the last century. And they will not stop until the middle class is destroyed.

Kathy never expected a career in radio as a talk show producer. Born and raised in Atlanta, Georgia, Kathy was completing her nursing degree when in 2001 - in an emergency - she was asked to fill in as the producer of Mike's program. Within a few (more...)
Related Topic(s): Atlas Shrugged; Governors; Health; Neocons; Republican; Seniors, Add Tags
Add to My Group(s)
Go To Commenting
The views expressed herein are the sole responsibility of the author and do not necessarily reflect those of this website or its editors.