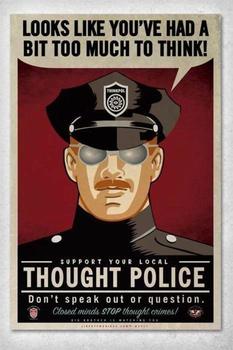 Eventually, tech theorist Clay Shirky has argued, so many people will have nude photos on the Internet that there will be no shame in one of them being yours. Privacy will no longer be necessary. It will be a halcyon time for politicians: no matter how much dirt your enemies dig up, none of it will stick because having done bad things and making stupid mistakes will be considered normative.

Eventually isn't here yet. So in the meantime, people who are either too boring to have done anything wrong or so lucky that they haven't gotten caught are deploying social media in a vicious online pogrom against those deemed politically incorrect. It's Orwell meets the Salem witch trials via "The Lord of the Flies," social justice warrior-style.

Thought-crime is already a prosecutable offense. A U.S. federal court has indicted WikiLeaks leader Julian Assange for thinking about, merely for what-if musing in conversation with Army whistleblower Chelsea Manning, about hacking a government computer. The government admits there was never an actual hack. Undercover FBI agents entice young Muslim men into nonexistent terrorist plots in order to entrap them. An Ohio man on probation for possession of child pornography was sentenced to seven years in prison for a handwritten diary he had written for his own use that depicted rape and torture of children disgusting but purely theoretical.

Coming of age pre-Internet I rest secure in the knowledge that most of my screw-ups and youthful indiscretions remain blissfully undigitized and unsearchable. I was wrong, I did bad things, hopefully I learned and won't repeat the same ones.

People under age 35 or so don't have that luxury. As Edward Snowden remarked, "They understand what it means to make a mistake, have someone with a smartphone in the room and then have it haunt you for the rest of your time in high school or college or whatever."

If and when Shirky's vision is realized, it won't matter. Digital evidence of intemperate language and drunk texts and obscene selfies will be so widespread that their revelation will be met with a collective shrug. Until then, we will have cases like that of Kyle Kashuv.

Kashuv, 18, is the right-wing counterpart of David Hogg. Both men survived the mass shooting at the high school in Parkland, Florida and both got into Harvard College. Unlike Hogg, however, Kashuv is a right-winger and speaks at pro-gun rallies. Also unlike Hogg, it has been revealed that Kashuv spewed a bunch of racist and anti-Semitic slurs online when he was 16. After Kashuv issued a series of apologies, Harvard rescinded his acceptance.

Kashuv claims to have become "a better person." Maybe, maybe not. But even if he hasn't, even if he's still and really a bigot, how are his private and political thoughts any of Harvard's business as long as he keeps his racist BS to himself?

Harvard is extremely unforgiving of its prospective freshmen. They previously rescinded admissions from 10 kids who shared dirty memes about the college on Facebook, and also famously from a woman who served time in prison for murder, because she didn't reveal her record on her application. Why should she have to? She did her time. Let her study up and move on.

It is notable that Kashuv apologized at length, eloquently, repeatedly. The only way to fix bad words is with good words and he did that. Was he sincere? Only he knows that; frankly, that should be enough.

The admissions officers are punishing something even more ephemeral than thought-crime. Call it post-thought-crime.

Harvard is turning this guy away either because they suspect he is insufficiently repentant or, more likely, because they think that what he said two years ago was so awfully distasteful that he deserves to be sanctioned despite and after he recanted, reformed and (claimed to have) stopped being the person who wrote those racist and anti-Semitic comments. Thought-crime is sinister and invasive; post-thought-crime goes still further because it eliminates even the possibility of redemption.

This, Harvard College is telling the world, is not a young man, a tabla rasa whose future is unwritten. His racist comments at age 16 make him as forever toxic as Chernobyl, a filthy demon worthy only of scorn and contempt. Harvard chooses to believe that he is as he behaved at his worst, two years ago. They choose to ignore him as he claims to be now -- better. The evil must be true; the good must be a lie. Apologies are worthless, merely the self-serving rhetoric of the justly condemned villain. There is nothing for Kashuv to do but slink away and die.

Related Topic(s): Assange; College; Facebook; George Orwell-1984; Harvard; Rhetoric; Whistleblower; Wikileaks, Add Tags
Add to My Group(s)
Go To Commenting
The views expressed herein are the sole responsibility of the author and do not necessarily reflect those of this website or its editors.