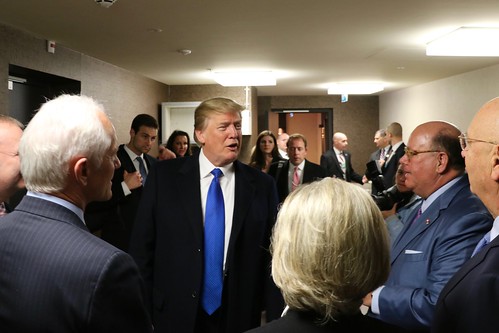 Did Trump give more than one speech at Davos? In the one I listened to, he had an interlocutor-- German I think, from the accent in his perfect English-- who asked him some pretty softball questions, and Trump expounded for longest about how great his tax bill was.

So it is possible that I must see if Trump actually gave TWO campaign speeches at Davos, because in the one public appearance I watched he was giving a campaign speech. He has never moved past that.

There were a couple of seconds of scattered half-hearted boos.

Now, booing is not a usual international expression of disapproval; there were probably a few in the international assembly who had never booed in their life, and weren't quite sure how. If an American audience had heard him throw in the "and fake" while gratuitously attacking the press at a venue of which he does not understand the significance, they would have let him have it.

Perhaps the reason it didn't happen here, besides that the international diplomatic-economic community is not a bunch of folks who do diplomacy and make national and international policy decisions by Twitter, they think more thoroughly than our president, is that the place was stacked with American cabinet members, including General Mattis. "My general, and my other generals," Trump called them, while acknowledging several of them by their first names.

The boos came in the same attack on the press which also saw a moment or two of mostly-suppressed giggles. Why, yes, the press HAS been tough on Donald J. Trump, a real estate hustler who made a pile working with the Genovese Family in New York, an abuser of women and hypocrite about it, a man who has never said an outright and sincere "I'm sorry" for anything and yet continues to have the support of the evangelical Christian community.

That's humorous, as I answered a friend of mine who is a Trump supporter, in our discussion over what was and wasn't humorous. I don't know if any of you have encountered it, but there has been a video accompanying the Republican hashtag #releasethememo that is purely an incitation to violent action by the Right.

The climax of this video actually includes a Caesar-figure with Trump's face, mouthing Trump campaign statements about Making America Great Again, pushing (former) President Obama at sword-point to his death in a bottomless pit (the film even included the impaling of Marco Rubio on a spear). It is a grotesque and pathological projection expressing the least common denominator of alt-right thinking, for whom President Obama has always been a prime target.

It was apparently originated by some entity called Thegamesrigged.com, and a more expert computer digger than I might want to investigate the connection between this outfit and the now viral hashtag, and the supposed Devin Nunes memo that he wants to release to all of Congress. We already know the contents of the memo, of course, in general: an indictment of the Mueller investigation, and protestations of innocence by the chief executive of any of the reasons why the arrests so far have taken place.

THE WHOLE SHEBANG is an obstruction of justice, is what this is leading to.

And you may be sure that the people of the rest of the world-- Europeans, South Americans, Asians, Africans, Down Under-- are not fooled by the man. Angela Merkel already told them many months ago that Europe could no longer put trust in the solutions this president proposes, nor the leadership he neither prefers nor shows.

"I came in with very low expectations and, I must say, he met them," sighed an Englishman present when interviewed in the wake of the speech. The expectation that Donald Trump will not be statesmanlike is perfectly reasonable, given his track record of being a boorish and self-interested fellow for whom no conflict of interest is an impediment if he wants something.

Before the election, I suggested that the single greatest decision that Donald Trump would have to make would be whether he wanted to continue to consider his main business to be his private and global real estate and gambling interests, or whether he wanted to try his hand at being the top manager, the CEO, of a business of which he was not the owner of one iota, quanta greater than his mere Trump brand.

He has never been able to separate the two, and because of that, along with a whole complex of mistaken motivations to do the most important job in the world, he will resign before the midterms.

Related Topic(s): Davos Economic Forum; Trump Campaign Speech, Add Tags
Add to My Group(s)
Go To Commenting
The views expressed herein are the sole responsibility of the author and do not necessarily reflect those of this website or its editors.