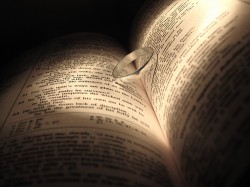 My interest is always piqued when I hear of great success stories from evangelical ministries serving audiences that are literally captive.

That's what's happening right now in theLouisiana State Penitentiary at Angola.Over at Solitary Watch, Jim Ridgeway writes a provocative piece chronicling this trend, which has been pushed by prison warden Burl Cain. While Cain'ss program of Christian education has been widely lauded for its ability to reduce prison violence, Ridgeway thinks there may be another side to Angola's transformation. I'd tend to agree.

Between the glowing press reports on Cain's work, there are hints that gaining access to prison programming -- education programs, for example--may be conditional on whether a prisoner is willing to embrace evangelical Christianity. The only college degree program at Angola, for example, is in Christian ministry (through New Orleans Baptist Theological Seminary), and requires a statement of personal faith in Jesus Christ for admission.

Nevertheless, Christian media has been quick to promote Cain's evangelistic passion as a new model for prison reform. Who could object to the fact that next week at Angola, the popular Bible club AWANA ("Bringing Jesus to Prison") is helping to host what may be the largest gathering of children and their incarcerated dads in U.S. history? (On May 1, some 1,000 children will be gathering at Angola for games, food, crafts and pony rides and a chance to hear their dads say, "I'm sorry/I love you.")

I wanted to learn more about what's happening in Angola, so I ordered Dennis Shere's book on Warden Cain, Cain's Redemption: A Story of Hope and Transformation in America's Bloodiest Prison. It's full of heartrending stories of the warden's experiences--from normal, everyday discipline to holding the hands of dying prisoners as they receive their lethal injections. Cain says that there may be as many as 2,000 men at Angola who have committed their lives to Christ. He expresses concern that when he leaves, though, the prison will revert back to violence and despair.

He might be right. While there may have been 2,000 out of 5,500 prisoners at Angola who have repeated the evangelical Sinner's Prayer of repentance, the number of those who did so because it was in their best short-term interest is unknown.

Warden Cain's religious standards are decidedly Southern Baptist, known for its history of aggressively soliciting converts. (I attended a Southern Baptist Church many years ago as a law student in Washington, DC, and was stunned that getting counted as a member was as easy as merely raising your hand at the end of a service.) Cain is without question a committed Christian. He cares about the downtrodden and disadvantaged in a way that's sadly missing in prisons across the U.S., to say nothing of churches across theU.S. He has learned, through his own walk of faith, to value all human life--an attitude that can transform any prison, regardless of religion. And he carries within himself a deep concern for the eternal destiny of those who have fallen through the cracks.

But I'd caution him against pushing prisoners respond to his faith, rather than to his charismatic power. Imposed Christian values, Christian morality and notches on the old salvation belt are no more of a lasting hope for Angola prison than they are for America.

Over 40 years ago in Louisiana, 3 young black men were silenced for trying to expose continued segregation, systematic corruption, and horrific abuse in the biggest prison in the US, an 18,000-acre former slave plantation called Angola. In 1972 and (more...)
Related Topic(s): America; Angola State Prison; Christian Values; Christian-only; Christianity; Education; Education; History; Jesus; Power; (more...) Prayer; Prison Industrial Complex; Prisoner Abuse; Reform; Violence, Add Tags  (less...)
Add to My Group(s)
Go To Commenting
The views expressed herein are the sole responsibility of the author and do not necessarily reflect those of this website or its editors.