"It's absolutely shocking the lengths Donald Trump will go to to shield himself from accountability." 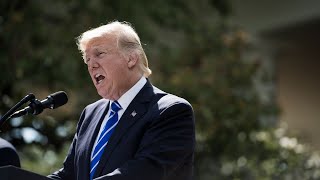 President Donald Trump late Thursday asked the right-wing Supreme Court to block the Manhattan district attorney's subpoena for his tax returns, arguing that he is "absolutely immune from all stages of state criminal process while in office."

Trump's 179-page petition (pdf) to the Supreme Court represents the final stage in the president's effort to stop Manhattan prosecutors from obtaining eight years of his personal and business tax records. Mazars USA, Trump's accounting firm, has said it will hand over the state documents if the Supreme Court declines to hear the case.

Ryan Thomas, spokesperson for progressive advocacy group Stand Up America, said in a statement that the president's "appeal to block the release of his tax returns is nothing more than a last-ditch effort to stymie a criminal investigation that's breathing down his neck."

"No one is above the law, including Donald Trump," said Thomas. "It's absolutely shocking the lengths Donald Trump will go to to shield himself from accountability. If Trump has nothing to hide, then he should immediately release his tax returns and give the American people the transparency they deserve."

Re: subpoena for his tax returns, Trump legal team files 179 page brief arguing that "he is absolutely immune from all stages of state criminal process while in office" https:// assets.documentcloud.org/documents/6549 876/Petition-for-Writ-Trump-v-Vance-1.pdf "

commondreams.org is a progressive publisher
Related Topic(s): Accountability; Investigations; Supreme Court SCOTUS; Trump Against Democracy; Trump Ego; Trump Tax Returns, Add Tags
Add to My Group(s)
Go To Commenting
The views expressed herein are the sole responsibility of the author and do not necessarily reflect those of this website or its editors.