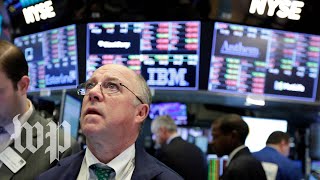 Okay, if you have no idea what an inversion of the yield curve means, it probably means you're a normal person with better things to do with your time. But for economists, and especially those who monitor financial markets closely, this can be a big deal.

The logic is that if you are locking up your money for a longer period of time, you have to be compensated with a higher interest rate. Therefore, it is generally true that as you get to longer durations say, a one year bond compared to three-month bond the interest rate rises. This relationship between interest rates and the duration of the loan is what is known as the "yield curve."

While this inversion has historically been associated with a recession in the not too distant future, this is not quite a curse of an inverted yield curve story. Most recessions are brought on by the Federal Reserve Board raising the overnight federal funds rate (a very short-term interest rate), which is directly under its control. The Fed does this to slow the economy, ostensibly because it wants to keep the inflation rate from rising.

The higher short-term rate tends to also raise long-term interest rates, like car loans and mortgages, which are the rates that matter more for the economy. However, longer-term rates tend not to rise as much as the short-term rate. In a more typical economy, we might expect a 3.0 percentage point rise in the federal funds rate to be associated with a 1.0-2.0 percentage point rise in the 10-year Treasury bond rate.

We get an inversion in this story when the Fed goes too far. It keeps raising the short-term rate, but investors in longer-term debt think that they see an end in sight to rate hikes and a reversal on the way. If the short-term rate is going to be falling to 2.0 percent or even lower in future months, then investors would welcome the possibility of locking in an interest rate like today's 2.38 percent on 10-year bonds, even if it means foregoing a slighter higher short-term rate at the moment.

That's pretty much the story we have today. Since December 2015, the Fed has raised the federal funds rate from essentially 0 to 2.5 percent. With little evidence of inflation and some signs of a weakening economy, many investors are betting that the Fed has stopped hiking rates and will soon be lowering them. This hardly means there will necessarily be a recession.

It is also worth noting that interest rates in the US are notably higher than in other countries, which do face a recession or near recession conditions. While the US 10-year Treasury bond pays 2.38 percent interest, a 10-year French bond pays just 0.31 percent. In the Netherlands, the interest rate is 0.13 percent, and in Germany, you have to pay the government 0.07 percent annually to lend them money.

The extraordinarily low long-term interest rates in other countries puts downward pressure on interest rates here, which is another factor in our inverted yield curve. The weakness of economies elsewhere does mean trade is likely to be a drag on growth in the immediate future, but it does not mean a recession.

To sum up the general picture, the U.S. economy is definitely weakening. The tax cut did provide a boost to growth in 2018, as shareholders spent much of the money they were given from the corporate tax cut. But there will be no additional boost in 2019. There was no investment boom to give us a big push going forward. Also, the rise in mortgage interest rates last year, following the Fed rate hikes, slowed housing.

As noted, trade is a drag on growth. With Republicans again concerned about deficits, since they got their tax cuts, we can probably expect some cuts in government spending that will also dampen growth.

However, with wages growing at a respectable pace, and job growth remaining healthy, we should see enough consumption demand to keep the economy moving forward. That means slower growth, but no recession.

People should not spend time worrying about the curse of the inverted yield curve, at least not unless something else bad happens to the economy.

Dr. Dean Baker is a macroeconomist and Co-Director of the Center for Economic and Policy Research in Washington, D.C. He previously worked as a senior economist at the Economic Policy Institute and an assistant professor at Bucknell University. (more...)
Related Topic(s): Economy; Financial; Investors; Percentage; Recession, Add Tags
Add to My Group(s)
Go To Commenting
The views expressed herein are the sole responsibility of the author and do not necessarily reflect those of this website or its editors.