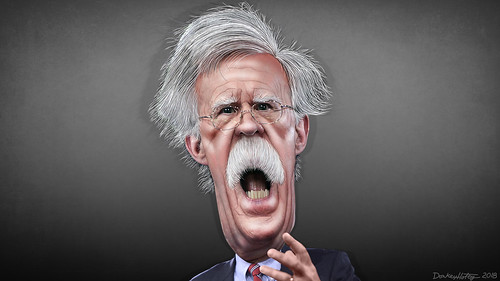 Characterizing U.S. national security adviser John Bolton as a human "landmine," a South Korean lawmaker reportedly joined others who have made clear their belief that Bolton is the true culprit behind faltering diplomatic efforts ahead of a planned meeting between President Donald Trump and North Korean leader Kim Jong-un next month.

"There are several landmines on the way to the summit between North Korea and the U.S.," South Korean lawmaker Chung Dong-young told a Seoul-based radio show, according to the Washington Post. "One of those landmines just exploded: John Bolton."

The South Korean lawmakers' comments on Bolton come as Moon is set to meet with Trump at the White House on Tuesday to help "shore up plans for a U.S.-North Korea summit that seem to be on shaky ground."

"We shed light on the quality of Bolton already in the past, and we do not hide our feelings of repugnance towards him," said Kim Kye Gwan, North Korea's vice minister of foreign affairs. "We are no longer interested in a negotiation that will be all about driving us into a corner and making a one-sided demand for us to give up our nukes and this would force us to reconsider whether we would accept the North Korea-U.S. summit meeting."

Bolton has a long history of calling for both regime change and a U.S. first strike on North Korea, warmongering that led Pyongyang to call him a "bloodsucker" when he was U.S. Ambassador to the United Nations.

"Many served under pro-engagement president Roh Moo-hyun, at a time when Bolton was a strong proponent inside the George W. Bush administration of the invasion of Iraq and of regime change in North Korea," Fifield adds. "After meetings with top officials [in Seoul] last week, one American analyst remarked -- only half in jest -- that the South Koreans detested Bolton as much as the North Koreans."

commondreams.org is a progressive publisher
Related Topic(s): Donald Trump And Kim Jong Un; John Bolton Warmonger; Meeting; Negotiation; North Korea; Nukes, Add Tags
Add to My Group(s)
Go To Commenting
The views expressed herein are the sole responsibility of the author and do not necessarily reflect those of this website or its editors.