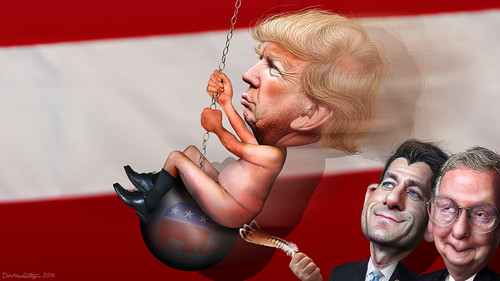 We're sailing in uncharted presidential waters. Donald Trump has moved beyond incompetency to the designation: "a danger to himself and others." One small solace, before Trump blows up the planet he'll probably first destroy the Republican Party.

Former Republican Congressman Joe Scarborough (https://www.washingtonpost.com/opinions/trump-is-killing-the-republican-party/2017/07/16/048056dc-68c4-11e7-a1d7-9a32c91c6f40_story.html?) recently wrote that Trump is "killing" the GOP: "the wreckage [caused by Trump] will break the Republican Party into pieces."

This guy goes to a psychiatrist and says, 'Doc, my brother's crazy, he thinks he's a chicken.' And the doctor says, 'Well why don't you turn him in?' and the guy says, 'I would, but I need the eggs.'

The joke captures the essence of the GOP conundrum: most Washington-based Republicans know that Trump is crazy but they're afraid to "turn him in" because they "need the eggs." They're afraid of alienating Trump voters.

The latest Washington Post/ABC News poll (http://abcnews.go.com/Politics/months-record-low-trump-troubles-russia-health-care/story?) found Trump with record low approval ratings (36 percent). Nonetheless, 82 percent of Republican voters approve of his job performance. The Republican rank-and-file hold fast to a President whom the rest of the electorate regards as certifiable.

Writing in the New York Times Magazine Mark Leibovich (http://www.nytimes.com/2017/07/11/magazine/washington-dc-politics-trump-this-town-melts-down.html?) observed, "Trump got elected...by portraying and revealing [Republican] politicians to be feckless weenies -- and many of them went out and reinforced this view by displaying their... unwillingness to stand up to him in office." That's the number one reason why Trump is killing the GOP, he's turned a set of weak leaders (Mitch McConnell, Paul Ryan) into quivering lumps of Jello.

That wouldn't be a problem, if Trump was a strong leader with a well-defined policy agenda but that's not the case. Trump's crazy. His only consistent behavior is unpredictability. As a consequence, the Trump Administration has no consistency. The only unifying themes are incoherence and fear.

Mark Leibovich writes that many Republican congress members live in "fear of mean tweets." They are afraid to oppose Trump because they fear the potential backlash.

When Trump ran for President, some voters mistakenly identified him as a "successful businessman" and, therefore, believed that he would provide a steady hand on the ship of state; that is, provide both a clear strategy and a seasoned ability to get things done. But Trump wasn't a successful businessman in the usual sense of that phrase; he's a successful media personality. Trump doesn't have a clear strategy but rather a collection of campaign phrases: "build the wall," "lock her up," "repeal and replace Obamacare," and (of course) "make America great again." From the standpoint of saving the Republican Party, Trump doesn't have a good record of getting things done. He's not a hands-on manager who badgers his subordinates until his objectives are accomplished; Trump lends his general support to initiatives and then disappears. Since occupying the White House, Trump has been disengaged from GOP congressional initiatives. Some observers say he spends more time watching Fox News than he does interacting with Republican leaders.

The failure of the Republican initiative to replace the Affordable Care Act (Obamacare) illustrates Trump's desultory management style. All of the heavy healthcare lifting was done by GOP leaders such as Paul Ryan and Mitch McConnell (aka "feckless weenies"). On a day-to-day basis, Trump was not involved and often seemed out-of-step with GOP leaders -- as when he characterized the House version of Trumpcare as "mean."

Buzzfeed (click here?) observed: "The premise of the value proposition that voters bought into was: [Trump] knew about the art of the deal and that he could break through 'Washington,' break through political norms, and get things done." Trump mislead his base; he doesn't know how to get things done.

Trump's evocative promise to "make America great again" was based upon three loose narratives: repeal Obamacare and replace it with something "terrific;" negotiate better trade deals that would (magically) bring back manufacturing jobs with decent wages; and build a border wall that would keep out immigrants and "protect American lives and jobs." While these were never detailed policy prescriptions, Trump's promises had a powerful hold on his base.

Now the Trump triad is in trouble. The GOP is incapable of repealing and replacing Obamacare. Trump hasn't displayed his ballyhooed prowess as a deal maker; for example, he promises to renegotiate NAFTA but, so far, nothing has come of this. Finally, Trump has no plan to build the wall.

Nonetheless, Trump voters hold tight to the belief that he's going to turn it all around, "get things done." Washington Post columnist Dana Milbank (https://www.washingtonpost.com/opinions/think-trumps-poll-numbers-are-bad-just-wait-till-his-backers-realize-theyve-been-had/2017/07/17/80415204-6b3e-11e7-96ab-5f38140b38cc_story.html?) explains that Trump supporters believe he can manage the economy, in general, and specifically bring back manufacturing jobs. Milbank notes, "manufacturing employment hit a record low last month of 8.47 percent of overall employment... Manufacturing wages rose less than the overall private sector." Milbank asks, "what happens [when] Trump's core backers discover that they've been had... manufacturing jobs aren't coming back and a Trump-ignited trade war is hurting U.S. exports?"

What will happen is that the Trump base will turn against Trump. And, the Republican Party. Winter is coming for the GOP.

Bob Burnett is a Berkeley writer. In a previous life he was one of the executive founders of Cisco Systems.
Related Topic(s): Congress; Donald Trump Lies; Donald Trump Supporters; Healthcare; Jobs; McConnell-Mitch; Politicians; Republican; Trump Idiot-in-chief; Trump Mental State; (more...) Trump Non-stop; Trump Presidency, Add Tags  (less...)
Add to My Group(s)
Go To Commenting
The views expressed herein are the sole responsibility of the author and do not necessarily reflect those of this website or its editors.