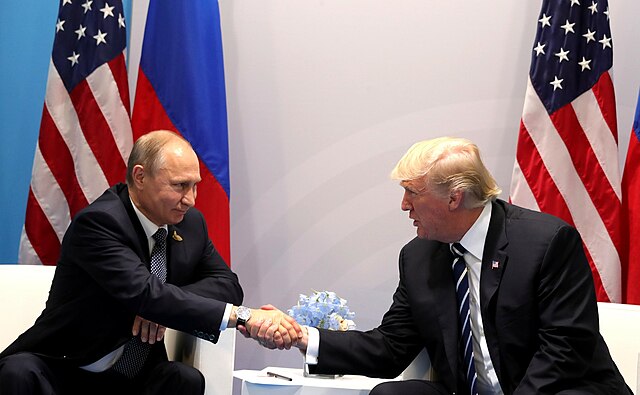 With stories being promoted about the Steele dossier and Russian uranium interests, Americans should remember the most important fact of the matter regarding Russian attempts to subvert our democracy, and that's this:

Russian dictator Vladimir Putin hated Hillary Clinton and worked aggressively to destroy her presidential candidacy, and supported Donald Trump and ordered successors to the KGB to go all out in a covert campaign to elect Trump as president.

Putin hated Clinton. Putin supported Trump. Clinton battled every Russian attempt to subvert democracy in the United States and Europe. Trump, the greatest political beneficiary of the Russian aggression against democracy, denies the aggression is happening and calls investigations of the crime nothing more than fake news and hoaxes.

Instead of being the subject of a political investigation into the matter of Russian uranium, a subject that Clinton had little involvement in that has been discussed at length for many months, the great truth about Clinton is this:

Hillary Clinton deserves a profile in courage award and a presidential medal of freedom for forcefully resisting Russian attempts to penetrate the high councils of the American government and bring Russian power to bear against American democracy.

When Russia tried to exert its power while Clinton was secretary of State, she defended America against Russia so fiercely that Putin moved aggressively against her. She should wear this as a badge of honor. History will speak kindly of her courage in standing up for American interests.

When Russia moved to exert power after Trump was elected president, the result brought revelations of countless meetings between people close to Trump and players working for Putin, repeated failures to disclose these meetings even in forms for security clearance, and matters now under criminal and counterintelligence investigations by the FBI and special counsel Robert Mueller. Trump will not wear this as a badge of honor. History will not speak kindly of his role in this seamy affair.

Related Topic(s): Clinton Campaign; Russia Bashing; Russia Hacking; Trump And Putin, Add Tags
Add to My Group(s)
Go To Commenting
The views expressed herein are the sole responsibility of the author and do not necessarily reflect those of this website or its editors.