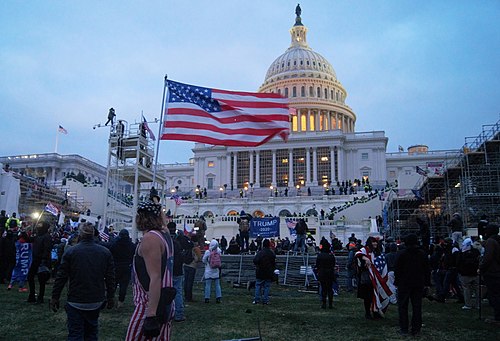 Right-wing hypocrites are lining up for an expected Supreme Court nullification of Roe v. Wade.

As restrictive anti-abortion state laws head to the six anti-choice fanatics on the Court, the Trump Cult's simultaneous attack on anti-virus vaccination grows ever-more stunning in its hypocrisy.

In short: they claim official mandates for masks and vaccinations in places where they could spread the virus violate their personal freedoms. As "anti-government" activists, they claim such mandates invade their sacred bodies.

And at the same time, they also demand that women who want to control their own reproductive lives must be denied.

So let's try to get this straight:

These "pro-liberty" anti-government fanatics portray masks meant to stop the spread of the coronavirus pandemic as a dictatorial plot to curtail their freedoms. One lunatic congresswoman says masks are the equivalent of the yellow star forced on Jews by the Nazis. Others proudly resist demands by local governments that likely spreaders take steps to weaken the pandemic. This, they say, is an invasion of their civil liberties.

So they refuse to cooperate with a community effort to save lives.

And yet " these very same people demand that the very same government invade the female uterus to prevent women from controlling their reproductive options.

It's the ultimate hypocrisy, indulged with actual violence by a fanatic right-wing demanding an authoritarian regime that hates our freedom.

It gets even worse.

It is definitively known, through long experience, that where abortion is made illegal, women who cannot afford quality health care in other states get inferior- -- or self-administered -- procedures that kill them and their unborn.

Related Topic(s): Death Threats; Diagnosis; Disaster Preparedness; Disgrace; Dishonesty; Distributive Justice; Hypocrisy; Trump, Add Tags
Add to My Group(s)
Go To Commenting
The views expressed herein are the sole responsibility of the author and do not necessarily reflect those of this website or its editors.