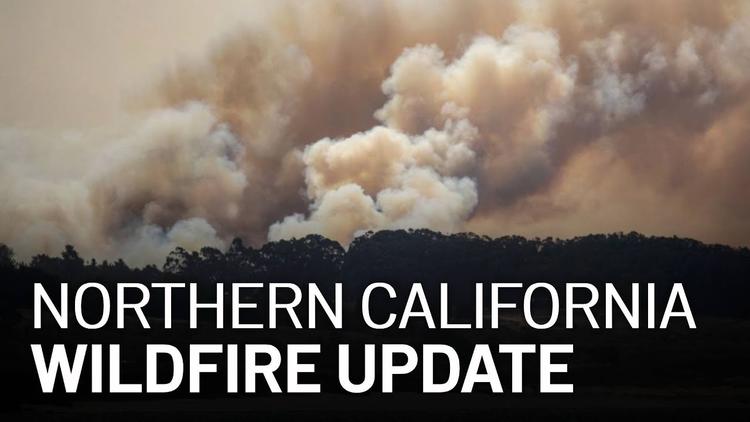 One of the speakers at the Republican National Convention on Monday evening was Nikki Haley, formerly Trump's ambassador to the United Nations, who helped usher the U.S. out of the Paris climate accords and who slammed Bernie Sanders' Green New Deal. Haley when pressed will admit that the climate is changing, but she means that the way you might observe that clouds are going by in the sky all the time. She does not believe we need to swing into action immediately to forestall global catastrophe. Her boss, Trump, called the climate emergency a Chinese hoax and doesn't think we are burning enough coal or drilling enough petroleum.

Monday's convention was full of ironies. It had to be held virtually because of the coronavirus pandemic, which Trump has allowed to get out of hand. Over 5 million Americans have fallen ill, nearly 180,000 have been killed by it, and we are still seeing a thousand deaths a day and some 50,000 new cases a day. These tragic statistics are the direct result of national government inaction and ineptitude. Even countries who barely have a functioning government have done loads better in dealing with the virus than the US.

Trump promised that the pandemic would go away like a miracle in April, or that the heat of the summer would kill it. He insisted on pushing against mask wearing, and for opening bars and restaurants around the country even when the rate of transmission was higher that 1, the cut-off according to the Centers for Disease Control.

So that the convention has to be held on line is the fault of one man, Donald J. Trump.

And as this gathering of climate change denialists goes on air, mother nature is slapping them around. Not only have they fumbled their way into a massive death toll, equaling three Vietnam Wars with regard to American casualties, but their insistence on making a bonfire of the environment means their convention has to compete with disaster scenarios in California and the Gulf of Mexico.

In California, Anne C. Mulkern at Scientific American reports, unprecedented wildfires are tearing through a million square miles of forest, leaving a blackened dystopia the size of Rhode Island in their wake. There are nearly two dozen of these conflagrations. A quarter of a million people have had to be evacuated or are preparing urgently to leave. Two of the fires are among the largest in the history of the state.

Hundreds of homes are gone.

Critics will point out that forest fires are natural. This is true. We've always had them. This is true. Some trees even depend on them to procreate. All true.

The frequency, severity and extent of these fires, is, however, extraordinary and there is nothing natural about that. This calamity is in some part the result of human beings driving gasoline cars and heating their buildings with coal and gas and engaging in high-carbon farming and building construction. These activities have added to the problem by some significant percentage points. Again, the climate emergency doesn't cause the fires and there would be some even under normal circumstances. It exacerbates them.

"Since the early 1970s, California's annual wildfire extent increased fivefold, punctuated by extremely large and destructive wildfires in 2017 and 2018. This trend was mainly due to an eightfold increase in summertime forest-fire area and was very likely driven by drying of fuels promoted by human-induced warming. Warming effects were also apparent in the fall by enhancing the odds that fuels are dry when strong fall wind events occur. The ability of dry fuels to promote large fires is nonlinear, which has allowed warming to become increasingly impactful. Human-caused warming has already significantly enhanced wildfire activity in California, particularly in the forests of the Sierra Nevada and North Coast, and will likely continue to do so in the coming decades."

The average surface temperature in California has skyrocketed by 1.8 degrees F. since 1980, according to a UCLA study reported at by Mulkern at Climate Wire. At the same time, there is 30% less precipitation. More heat and more dryness equals more and bigger wildfires.

On Aug. 16, the temperature in Death Valley reached 130 degrees F., probably the highest ever recorded on earth (that temperature was supposedly reached once before in 1913, but the instrumentation wasn't as good then). Need I add, this is not a good sign?

Related Topic(s): Climate Change Deniers; Climate Crisis; Forests; Hurricanes; Oil; Party Machine Republican; Southern California Wildfires; Water, Add Tags
Add to My Group(s)
Go To Commenting
The views expressed herein are the sole responsibility of the author and do not necessarily reflect those of this website or its editors.