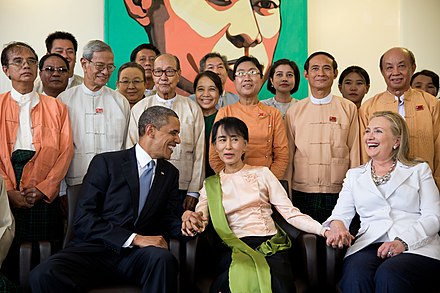 The situation on the ground in Myanmar continues to deteriorate. In the initial days after the February 1 military coup, the junta seemed somewhat reluctant to use brutal force to disperse demonstrations and curtail online and mobile communications. But in recent weeks, as the civil disobedience movement in Myanmar has grown in strength and size, and has convinced many civil servants and other workers to walk off the job, the junta has reacted with brutal fury. It has declared martial law in several parts of the country, including areas of Yangon, and has stepped up the pace of detentions, assaults, and killings of protestors and other civilians. Just this past week, some fifty people last Sunday were killed as authorities opened fire on demonstrators in Yangon and other areas, and the military also has increased Internet blackouts and other communications shutdowns in many parts of the country. (Some two hundred people have been killed since the coup, according to an estimate released by the United Nations High Commissioner for Human Rights.)

With communications increasingly shut down, it seems likely the military will step up arrests and killings, in areas where it is becoming increasingly difficult for people to get information out. The junta also has cracked down on independent media, forcing many outlets to close or move into exile, and further limiting coverage of potential atrocities. Some demonstrators have fought back with makeshift weapons, and some have attacked Chinese factories in the country.

Foreign countries have multiple options for increasing the pressure on the Myanmar junta and supporting the civil disobedience movement-boosting targeting sanctions on military leaders and military holding companies, for instance-but they also must prepare for massive refugee outflows from Myanmar. In prior eras of protests and/or military crackdowns, like in the late 1980s, in 2007, and in 2017-18 in Rakhine State, many Myanmar nationals streamed across borders to Bangladesh, India, and Thailand, and also sought refuge further on in places like Indonesia, Malaysia, the United States, and other developed countries.

The Biden administration admirably has granted Temporary Protected Status to Myanmar nationals in the United States, so that they do not have to immediately return to Myanmar. But this status only affects a small number of people already in the United States-around 1,600, by some estimates, who will get eighteen months of Temporary Protected Status. The administration should consider applying pressure on Thailand not to push back Myanmar nationals and to allow the UN High Commissioner for Refugees access to people fleeing Myanmar, and pushing for an emergency conference of major powers who could provide aid for countries, like India and Thailand, receiving incoming Myanmar nationals and possibly could also agree to take in certain amounts of people fleeing Myanmar.

The Biden administration also should make good on its promises to significantly raise the limit on the number of refugees admitted to the United States for the next fiscal year. This might not immediately help people fleeing Myanmar. But the State Department's report on Biden's plan for refugee admissions notes that the coup and instability in Myanmar likely will cause a "renewed flow of people fleeing Burma. Raising the refugee cap significantly would provide many more opportunities for Myanmar nationals who had already made it out of the country to neighboring states to come to the United States as refugees.

The Council on Foreign Relations (CFR) is an independent, nonpartisan membership organization, think tank, and publisher dedicated to being a resource for its members, government officials, business executives, journalists, educators and (more...)

Related Topic(s): CFR; Myanmar, Add Tags
Add to My Group(s)
Go To Commenting
The views expressed herein are the sole responsibility of the author and do not necessarily reflect those of this website or its editors.

As Myanmar's Turmoil Gets Worse, External Actors Should Prepare for Refugee Flows