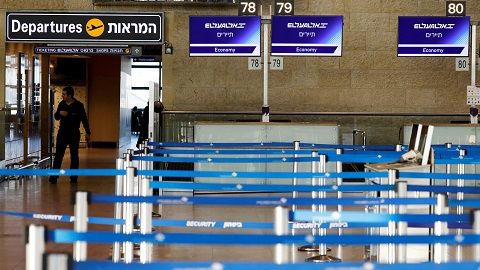 Two weeks ago he had won a wafer-thin majority vote in the parliament that gave him first shot at trying to put together a coalition government.

Instead he has conceded to Netanyahu, who will remain prime minister for the next 18 months. Gantz is supposed to take over in late 2021, though Netanyahu has a formidable reputation for double-dealing.

Over the past year Gantz fought three hotly contested, though indecisive, general elections in which he vowed to bring down Netanyahu, who has ruled continuously for 11 years.

He had promised supporters he would never sit in a government alongside Netanyahu, who is due to stand trial on multiple corruption charges.

Predictably, the U-turn tore apart Gantz's Blue and White party. Denouncing the decision, two of the alliance's three constituent factions said they would head into the opposition.

There has been increasing governmental paralysis over the past year with neither Gantz nor Netanyahu able to cobble together a majority coalition with other parties.

The reason was the Joint List party, representing Israel's Palestinian citizens, a fifth of the country's population, which effectively held the balance of votes. None of the main Jewish parties was prepared to be seen relying on its 15 seats.

Even with Gantz's depleted party, Netanyahu's "emergency government" should now be able to muster more than 70 seats in the 120-member parliament, giving him a safe majority.

Renowned for his ability to pull off political miracles, Netanyahu appears to have gradually worn down Gantz's resistance over the past 12 months. The coronavirus epidemic proved the final straw.

Netanyahu has exploited justifiable fears about the virus to cement his status as Father of the Nation. In regular addresses, he has presented himself as Israel's Winston Churchill, the British wartime leader who helped vanquish the Nazis.

He has now served longer as prime minister than the country's founding father, David Ben Gurion.

Gantz, it seems, assessed that there was no practical way to push for a fourth election during the current lockdowns. And in any case Netanyahu, given his complete dominance of the airwaves, would have been able to cast Gantz as recklessly endangering Israel's health and its security by refusing to join him in government.

The Blue and White leader may have blanched too at the prospect of another no-holds-barred election campaign, unleashing yet more of the dirty tricks in which Netanyahu and his allies excel.