General Motors (GM) was founded in 1908 in Flint, Michigan, and grew to be the largest corporation in the world. Its market capitalization reached $50 billion in 2000. In the past week, its market capitalization dropped below $1 billion to levels last seen during the 1920s. The story of General Motors is the story of America. In 1953, at the peak of its dominance, its President, Charles Wilson, declared before Congress that what was good for the country was good for GM and vice versa. Its rise to power and decline towards insolvency parallel the rise and fall of the Great American Republic. Overconfidence, hubris, lack of courage, foolish decisions made, and crucial decisions deferred have been the hallmarks of GM and U.S. GM’s stock price reached $1.77 last week, a 71 year low. It peaked at $100 during the Dot Com boom in 2000 and was still at $50 in 2007. The market has voted and it says GM is bankrupt. 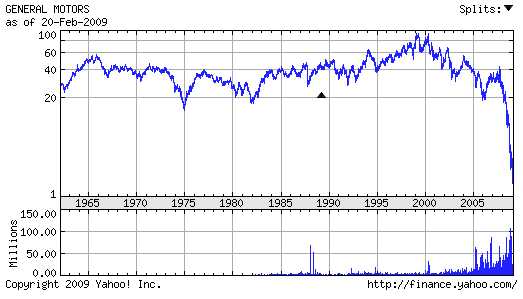 American carmakers have seen their market share drop from 85% in 1985 to 43% today. GM’s market share peaked at almost 50% in the 1960’s. It reached a historic low of 19.5% in January. Its sales plummeted 49% from a year ago. GM has too much debt, too much bureaucracy, too many plants, too many car lines, too many employees, and too many future healthcare and pension obligations. Of course, the only way a company can be in such a disastrous position is through decades of mismanagement. The only logical solution is for GM to enter a pre-packaged bankruptcy with financing provided by the U.S. government if bank financing is unavailable. Shareholders and bondholders will be wiped out. They made a bad investment. Plants will be closed, UAW contracts restructured, management replaced, employees fired, debt written off and future obligations reduced. A much smaller viable company that can compete in the 21st Century would exit bankruptcy in a year or two. A profitable, low market share is preferable to a high market share with billions in losses. 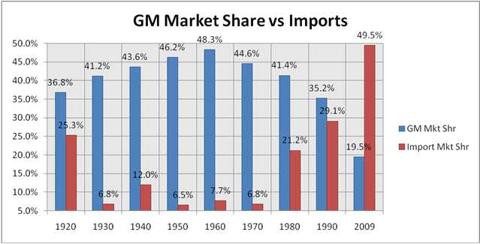 The decline of GM is a testament to how poor strategic decisions over the course of decades will ultimately lead to collapse. The United States has followed the GM model of failure for the last three decades. The U.S. has too much debt, too much bureaucracy, too many government supported industries, too many agencies, too many employees, and $53 trillion of unfunded future liabilities. See any similarities to GM? Can the U.S. avoid the fate of GM, or is it too late? If we can learn the important lessons of the GM decline, it may not be too late to reverse our course. Or we can continue on the current path and follow the advice of Will Rogers.

If stupidity got us into this mess, then why can’t it get us out?

By the early 1920s, General Motors had surpassed Ford Motor Company (F) as the largest car company in the U.S. under the leadership of Alfred P. Sloan. He created the concept of annual styling changes that kept consumers coming back. He also established a pricing structure for each of GM’s brands from lowest to highest (Chevrolet, Pontiac, Oldsmobile, Buick and Cadillac). The idea was to keep a family coming back to GM over time as they became wealthier. He was a pioneer who drove GM to become the largest and most profitable industrial enterprise the world had ever known. His words reflect that spirit.

There has to be this pioneer, the individual who has the courage, the ambition to overcome the obstacles that always develop when one tries to do something worthwhile, especially when it is new and different.

In the midst of the Great Depression, Mr. Sloan was able to keep General Motors profitable. That is an indication of a smart, realistic businessman who didn’t make poor decisions during the Roaring 20s. GM’s results during the heart of the Depression, when one-third of all dealers went broke, according to Automotive Daily News were:

By 1936, GM managed to increase car sales to 1.7 million and to 2 million by 1941, before converting operations to military requirements. Only an executive like Sloan comfortable in his own skin and tolerant of other opinions would speak the following words.

If we are all in agreement on the decision - then I propose we postpone further discussion of this matter until our next meeting to give ourselves time to develop disagreement and perhaps gain some understanding of what the decision is all about.

The best business decisions are made after open debate that includes dissenting opinions and arguments. Only great leaders allow this type of decision making. Alfred Sloan led GM for over 30 years, retiring in 1956. GM’s profit in 1955 had reached $1.2 billion ($8 billion in today’s dollars). It was on top of the world.

On Top of the World

During World War II General Motors produced armaments, tanks, vehicles, and aircraft to help the Allies to victory. During the 1950s, GM became the largest corporation in America and became the 1st company to pay taxes over $1 billion in a single year. In 1955, GM employed 624,000 Americans. In the copy of the 1955 GM Annual report below, it shows that only 27 cents of every dollar of revenue was paid to employees. The GM business model was very profitable. Their market share peaked at 54% in 1954, the same year they sold their 50 millionth automobile. After the retirement of Sloan, a visionary leader failed to materialize. GM began to show signs of overconfidence as the 1960s arrived. They started to believe their own press clippings. They failed to heed the advice of another well known auto man Lee Iacocca.

The most successful businessman is the man who holds onto the old just as long as it is good, and grabs the new just as soon as it is better. 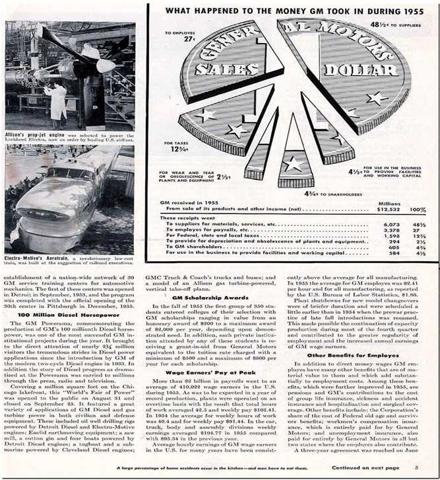 Peter Drucker, the world renowned management guru, wrote a detailed analysis of General Motors in 1946 called Concept of the Corporation. His suggestions to management and the UAW were scoffed at by both parties. He suggested the automaker might want to reexamine a host of long-standing policies on customer relations, dealer relations, and employee relations. Among his specific recommendations was for GM's hourly workers to assume more direct responsibility for what they did, adopting a "managerial aptitude" and operating within a "self-governing plant community." The UAW's powerful president, Walter Reuther, greeted that notion this way: "Managers manage and workers work, and to demand of workers that they take responsibility for what is management's job imposes an intolerable burden on the working man." Reuther did not fall into the “visionary” category.

James Quinn is a senior director of strategic planning for a major university. James has held financial positions with a retailer, homebuilder and university in his 22-year career. Those positions included treasurer, controller, and head of (more...)
Related Topic(s): Cars; Decline; Government; Government Corruption; Government Spending; Government Takeover; Management; Management; National Debt -Trade Deficit; National Debt Cost Per Citizen; (more...) National Debt Interest; Nationalism Nationalizing, Add Tags  (less...)
Add to My Group(s)
Go To Commenting
The views expressed herein are the sole responsibility of the author and do not necessarily reflect those of this website or its editors.