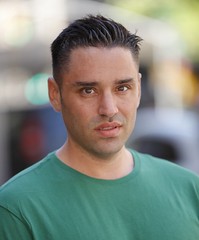 What are two things that Martha Stewart, Walmart and Exxon have in common?

1. They've all been caught doing highly unethical business acts that were borderline despicable and in some cases found to be illegal.

Hence, they are all a "necessary evil."

Business is all about what you can do for the other guy. How can you solve their problems?

Where many entrepreneurs fall short is that they can solve a problem, but solving problems doesn't grow a business. The entrepreneur must execute the problem-solving in a manner that is so effective, efficient and beyond the competition that their clients need them.

So, how does the younger entrepreneur become the "Necessary Evil"?

- You Earn a Work Life Balance. You Don't Take It as a Given.
Put in the 16-hour days. While the competition sleeps, you study. When first starting out, if you don't impress people and catch their attention, you're never going to break into an industry.

The companies firmly entrenched in the space don't exactly roll out a doormat for new competitors. When you begin to show some of the executives in the industry that you are a threat to their ability to still afford that condo in Miami while paying for the twins' college, it tends to anger them.

- You Have Zero Tolerance for Failure.
To be a successful entrepreneur, you can't go into the game thinking that if you fail, there's a second time around because x or y entrepreneurs had a failure and went on to success.

It could be opening day of the Super Bowl, but Tom Brady's mentality on the field from game one of that season does not change. You treat everything that you do as if it were the Super Bowl. That's how hard you have to try. Then, you can't fail because at that point, it's referred to as, "Just didn't work out."

- It Is Not the Direct Work That Gets You Necessary Evil Status, It's the Indirect Work.
For example, about 2 years ago I knew I had to get my company's website ranked highly in the Google searches because all good businesses have incoming clients while all chop-shops don't have too much of anything incoming.

I figured that because I own a staffing firm, we could be listed on college career websites and I could get a .edu link. I clocked in at about 400 cold-calls to university career centers.

They were not too welcoming and I only got 15 links. But that was 15 more .edu than many of my competitors will ever see.

In the end, I can even tell you that I know one of the career center guys from University of Arizona who has been at the school for so long, he was given the honorary email of mike @ arizona.edu (obviously, Mike is not his name, but same idea).

About Ken Sundheim: 31 year-old business owner of an executive search firm by the name of KAS Placement based in New York City. KAS Placement was started in 2005 from studio apartment by the CEO and now has clients from over 30 countries in 100 different industries . As a business writer, Ken's articles have been syndicated or published in: WSJ.com, Forbes.com, NYTimes.com, USAToday.com, (more...)
Related Topic(s): Business; Business Categories; Business Cycle; Business Services; Business Small; Business-Economics; Business-Industry; Corporate Small Business; Deceptive Business Practices; Small Business; (more...) Small Business Entrepreneurship, Add Tags  (less...)
Add to My Group(s)
Go To Commenting
The views expressed herein are the sole responsibility of the author and do not necessarily reflect those of this website or its editors.

Why Good Grades Are Important To Start A Successful Career

A Condensed History of Social Media