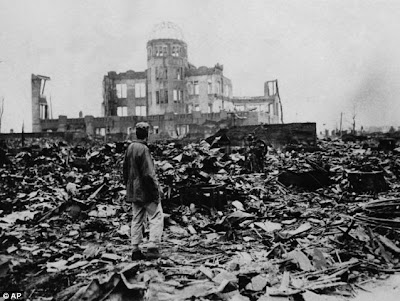 This year marks 68 years since the US atomic bombing of Hiroshima (August 6) and Nagasaki (August 9).  The US is the only country to ever use an atomic bomb against another country.

The US talks alot (both Republicans and Democrats) about how evil nuclear weapons are.  Who could ever argue with that?  But the US practices the height of hypocrisy as our nation has more nuclear weapons than any other country.  The US has also assisted other nations such as Israel, UK and now recently India in building their nuclear weapons.  Accordingly the US only judges some nations like Iran, North Korea, Russia or China when they build nukes.

Despite rosy speeches by Obama about the need to get rid of nuclear weapons his administration is doing the opposite.  More tax dollars are being spent today on development of US nuclear weapons than during the average years of the Cold War.  There is money in the current budget request for US Department of Energy nuclear laboratories to undertake development of a new warhead to launch nuclear war either from a land-based silo or a submarine.

But any hopes for real negotiations for serious reductions in nuclear weapons between the major powers will not be possible in this day and age.  Why?  Simply because Obama, and the Congress, insist on surrounding Russia and China with so-called "missile defense" systems.  Deployed as ground-based launchers and on Navy Aegis destroyers, these interceptor missiles are the shield that would pick off any possible retaliation by Russia or China after a Pentagon first-strike attack.

Hard to imagine that the US would launch a first-strike attack?  Ask Iraq.  The Obama "pivot" into the Asia-Pacific is putting in place the weapons systems to launch such an attack.  And the US Space Command annually war games a first-strike attack on China, set in the year 2016.

Some years ago I watched a Pentagon news conference on C-SPAN where a reporter asked a military officer about missile defense deployments.  The question: "What if the missile defense system did in fact knock down a particular nation's nuclear missile.  What would happen to the radioactive fallout?"

The answer from the Pentagon official shocked me.  He replied:  "The nuclear fallout would land on the offending nation because we'd take out their nuclear missile near their territory."

The Pentagon officer had never heard of the law of physics...the wind blows.

It's this kind of mindless arrogance that keeps the nuclear arms race growing.  It's also profit for the weapons industry.

While in Washington DC last weekend for the War Resisters League conference I heard this incredible story that well illustrates the greed of the military industrial complex.


I learned that the world's largest weapons corporation, Lockheed Martin (L-M), has built a hotel in Montgomery County, Maryland.   They got the state to pass a law that exempts L-M from paying the state hotel occupancy tax.   Then L-M tried to get the county to exempt them from their occupancy tax as well but public outrage halted those plans.

Not to be denied though L-M then went back to the state and got them to pass a law requiring Montgomery County to exempt L-M's new hotel from their occupancy tax.

We've got to dismantle the war machine if we hope to halt the nuclear threat and the drive for endless war on behalf of corporate globalization.  Our rallying cry must be to convert the military industrial complex for peaceful production.  Build rail systems rather than nukes or missile defense systems.

Related Topic(s): India; Iran; Korea; Nagasaki; Nukes; Obama; Pentagon; Russia; Weapons, Add Tags
Add to My Group(s)
Go To Commenting
The views expressed herein are the sole responsibility of the author and do not necessarily reflect those of this website or its editors.