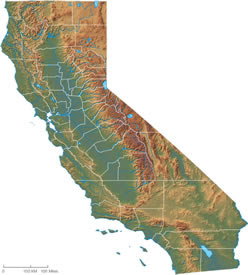 California, like Africa, is oil rich. Africa has surpassed the Middle
East as a source of U.S. oil imports,and California is third to
Texas and Alaska, as an oil producing state. Yet most Africans enjoy
none of the wealth consequent to oil extraction in their
homeland, much like Californians. California charges no oil and
natural gas severance tax at the wellhead, unlike any
other state in the U.S., and, unlike even any African state.
(Humbold State University map.)

California Governor Arnold Schwarzenegger now threatens California much as the International Monetary Fund (IMF) and World Bank threaten debt strangled, resource ransacked, environmentally assaulted, and de facto colonized Africa, and the rest of the Global South. In negotiations over the budget deadlock that now has California operating on CA IOUs, he's demanded that the majority Democratic California Legislature repeal years of hard won labor and environmental protection in exchange for his signature on a budget that saves at least some of the most basic human services.
If enacted without amendment, his harsh budget cuts will end many California college students' educations and sentence the most vulnerable Californians to extreme privation, and even death; some Californians will literally die without AIDS medication, in-home health services, health care for children, and other very basic social services that Schwarzenegger insists California can no longer afford.
Why is California no longer able to afford basic decency and dignity?
Because Schwarzenegger and his Republican minority:
1) Refuse to ask the wealthiest Californians, and corporations, to join in what he himself calls "shared sacrifice."
2) Refuse to ask Big Oil, despite record profits, to join in the "shared sacrifice," by refusing to impose an oil and natural gas tax at the wellhead, in this state which so uniquely charges none.
3) Don't even propose trimming all the State's outright contributions to corporations, in "public private partnerships" for infrastructural development, and/or, subsidies, to California's enormously wealthy utility monopolies, like Pacific Gas'n Electric and Southern California Edison.
California is the world's eighth largest economy, and, the largest state in the U.S.A. If Arnold Schwarzenegger's harsh end game succeeds here, it will no doubt send waves of corporatist triumph around the world.


On June 30, 2009, I recorded this KMEC Radio interview with California Assembly Majority Leader Alberto Torrico, on Arnold Schwarzenegger's budget and agenda, posted to the Op-Ed News, http://tinyurl.com/mcandh earlier this week.