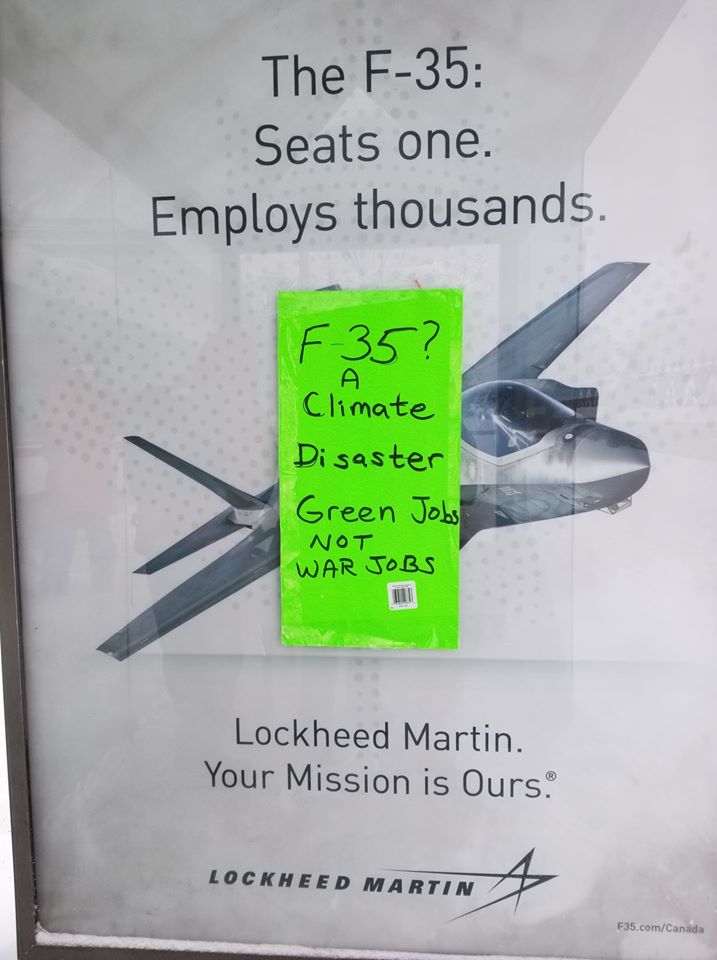 More politically dependent than almost all other industries, arms manufacturers play for keeps in the nation's capital. They target ads and events sponsorships at decision makers while hiring insiders and military stars to lobby on their behalf.

Activist and academic Tamara Lorincz recently posted a photo of an F35 ad in a bus shelter in front of Parliament Hill. US weapons giant Lockheed Martin is pushing hard to win a $19 billion contract to supply the Canadian air force with a fleet of new fighter jets.

To gain a share of the public funds on offer arms companies target ads at political and military leaders, promoting their products in washrooms and bus shelters where Department of National Defence (DND) and Canadian Forces (CF) officials congregate. Rideau Institute founder Steven Staples pointed out that "you can't walk around in Ottawa without tripping over some arms dealer on Spark Street."

Beyond promoting their wares in the nation's capital, companies advertise aggressively in publications read by Ottawa insiders such as iPolitics, Ottawa Business Journal and Hill Times. "Today's Morning Brief is brought to you by Canada's Combat Ship Team," noted a regular iPolitics ad. "Lockheed Martin Canada is leading a team of BAE Systems, CAE, L3 Technologies, MDA and Ultra Electronics to deliver the Royal Canadian Navy's future fleet of surface combatants." Their ads also foot much of the bill for journals read by military officials such as the Canadian Defence Review, Canadian Naval Review and Esprit de Corps.

A sales pitch carries more weight when it comes from a friend, CF "star" or experienced veteran. As a result, arms companies contract former CF and DND leaders to lobby on their behalf. Long-time Project Ploughshares campaigner Kenneth Epps explains: "there are many cases of government officials who, very early after retiring, become lobbyists or advocates of certain types of equipment or representatives of particular companies. They come from government and know the ins and outs of how government decisions are made, who in government to contact and what arguments might be useful to advocate for certain types of equipment."

But contracting former CF/DND as lobbyists is a half measure. Some arms firms offer executive positions to retired CF leaders. In 2013 former deputy commander at NORAD and commander of NATO forces in Libya, Charles Bouchard was appointed "country lead for Lockheed Martin Canada" in a bid to convince Ottawa to purchase its F-35 jets. Four years later L3 Technologies appointed Major General Richard Foster to oversee its Canadian business. The press release announcing its hiring of the former commander of the RCAF and deputy commander of the Joint Operations Command highlighted "his extensive military experience and work with foreign governments." In 2012 former Navy commodore Kelly Williams became General Dynamics Canada's senior director of strategy and government relations while three weeks after Lieutenant-General Andrew Leslie retired as Chief of Transformation for the CF, CGI Group appointed him to lead an Ottawa-based business unit seeking to "serve the Canadian Forces around the globe."

It's not only CF leaders who use their public sector careers as a springboard to lucrative arms industry positions. Weapons makers often hire top bureaucrats who were formerly responsible for arms procurement. Two weeks after stepping down as a deputy minister of defence in 2017 after years of procurement work John Turner was appointed vice president of operations at arms contractor PAL Aerospace. In 2011 CGI Group hired 12-year DND veteran Ken Taylor as vice-president of cyber security in Canada. A CGI Group press release noted: "In his new role, Ken will work closely with both government and commercial clients as part of the newly formed Canadian Defence, Public Safety and Intelligence business unit under the leadership of Lieutenant-General (retired) Andrew Leslie." (Leslie was later Justin Trudeau's Parliamentary Secretary to the Minister of Foreign Affairs.)

The CF-leader-to-arms-executive pipeline is important to the upper echelon of the military. In 2008 columnist Don Martin pointed out that "dozens of retired officers pocket salaries they could never have dreamed of as soldiers."

The prospect of a lucrative post-retirement industry position increases the likelihood that CF leaders identify the military's interests with arms makers. The 'rent a general' pipeline strengthens interest in expensive new weaponry and opposition to arms control measures. Since many Canadian weapons companies are branch plants of US firms, lucrative post-retirement positions also increase CF leaders' support of the US military-industrial complex.

To weaken militarism, it is imperative to reduce the financial benefits sloshing around the system. Senior CF and DND officials should be restricted from lobbying for at least five years after leaving the public service and other measures ought to be adopted to weaken the link between the military hierarchy and arms firms.

In the meantime, activists in Ottawa should follow Lorincz' lead and 'correct' arms industry ads. She posted a sign on top of the Lockheed Martin ad outside Parliament noting, "F35 Climate Disaster: Green Jobs Not War Jobs!"

Related Topic(s): Canada; Military, Add Tags
Add to My Group(s)
Go To Commenting
The views expressed herein are the sole responsibility of the author and do not necessarily reflect those of this website or its editors.