Now, the state's voters may kick out the official responsible for the fiasco 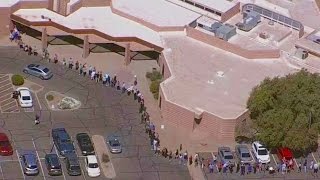 The uneven and unequal electoral structures of the United States -- which allow local officials to set different standards for voting from jurisdiction to jurisdiction -- have long been understood as a disaster waiting to happen.

In Arizona, on March 22, it happened.

Because of one local official's stunning missteps and misdeeds, the state's presidential primary voting turned into a fiasco.

Voters in Arizona's largest county waited as long as five hours to cast votes. Polling places ran out of ballots. Television networks began calling primaries for front-runners (Donald Trump for the Republicans, Hillary Clinton for the Democrats) as voters were still waiting outside polling places. Voters who stuck it out actually found themselves casting ballots on the day after the election.

"It's a national disgrace that people have to wait hours to cast a vote in any election," declared Vermont Senator Bernie Sanders, whose name was on the primary ballot that day.

The state's largest newspaper headlined an editorial on the fiasco: "A five-hour wait to vote in Arizona primary? That's shameful."

Yet the official who was responsible for the mess, Maricopa County Recorder Helen Purcell, essentially said "oops" and refused to resign. The presumption on the part of many was that she would be above or beyond accountability.

That presumption may turn out to have been wrong, however.

Purcell is a Republican elected official. On Tuesday she faced her own reelection primary. And early Wednesday morning, The Arizona Republic reported that...

"Aaron Flannery, a human-resources consultant who campaigned on a promise to bring a 'fresh pair of eyes' to the office, held a razor's-edge lead over Purcell early Wednesday morning after trailing by an equally slim margin through much of Tuesday night."

Flannery, who ran a low-key and strikingly gracious campaign, was ahead by just 300 votes out of more than 250,000 cast. Thousands of early ballots and provisional ballots still must be counted. That will take several days. And if the race remains this close, a recount will be required. (A spokeswoman said Purcell would not be involved in the process, though it would be conducted by her office.)

Related Topic(s): Arizona Primary; Democrat; Republican; Vote Suppression; Voting, Add Tags
Add to My Group(s)
Go To Commenting
The views expressed herein are the sole responsibility of the author and do not necessarily reflect those of this website or its editors.