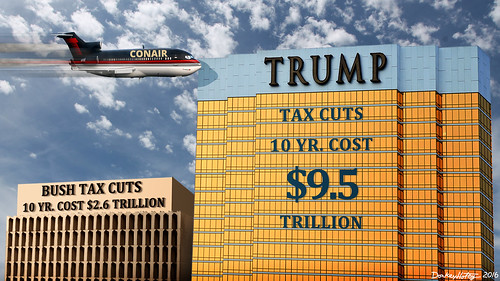 By far the biggest part of the tax cut the Republicans pushed through Congress last year was a cut in the corporate income tax rate. The package included many special provisions for specific industries, and exempts future foreign profits from US taxes altogether. But its main feature was a reduction in the corporate tax rate from 35 percent to 21 percent.

Most immediately, this looks like a huge giveaway to the rich, who own a grossly disproportionate share of stock. The richest 1 percent of households hold nearly 40 percent of stock shares, and the top 10 percent holds close to 80 percent. Lower corporate income taxes means more money in these shareholders' pockets. It can take the form of share buybacks, dividend payouts or simply higher prices per share, as stock values reflect the fact that companies keep a larger portion of their profits.

But the Trump administration argued that reducing corporate taxes would actually benefit ordinary workers. They argued that workers would see wage gains that were two- or three-times the size of the tax cuts. The argument was that the tax cut would prompt a flood of investment that would increase the size of the US capital stock by roughly a third, after a decade.

The arguable part of the story is the link between corporate tax rates and investment. Those of us who are critical of the tax cut are skeptical that lower tax rates can have this large of an impact on investment.

Historically, there has been little relationship between after-tax rates of profit (the relevant factor) and investment. Furthermore, we did this experiment before. In 1986 Congress lowered the corporate income tax rate from 48 percent to 36 percent. There was no flood of investment following this rate cut. In fact, measured as a share of GDP, investment fell slightly over the next two years.

Since the tax cut passed, we get another chance to see whether this experiment works. Unfortunately, the discussion about the impact of the tax cut on investment has been obscured by worker bonuses announced by many companies as a public relations move.

To convince us that workers will share in the benefits of the tax cut, rather than go into shareholders' pockets, many major companies announced one-time bonuses. In almost all cases the bonuses were just a small fraction of the money received from the tax cut.

The bonuses are very much a sideshow. The Trump administration promised an investment boom, not companies sharing a fraction of their tax break.

We now have the first evidence on the course of post-tax cut investment. It does not support the boom hypothesis.

The Commerce Department releases data on capital goods orders every month. These are the machines and equipment that comprise, by far, the largest single component of investment. Orders just means the companies decide they want to buy the items, not that they actually have the equipment in place and running.

This is obviously early in the game. The tax plan just passed in December, but the broad outlines were known back in September. If tax cuts were a huge motivation for investment, we would expect that forward-looking businesses were already developing plans once the tax cut became a serious possibility.

Dr. Dean Baker is a macroeconomist and Co-Director of the Center for Economic and Policy Research in Washington, D.C. He previously worked as a senior economist at the Economic Policy Institute and an assistant professor at Bucknell University. (more...)
Related Topic(s): Domestic Policy Failures; Donald Trump Lies; Taxes; Trump Tax-cut Scam; Working Poor, Add Tags
Add to My Group(s)
Go To Commenting
The views expressed herein are the sole responsibility of the author and do not necessarily reflect those of this website or its editors.