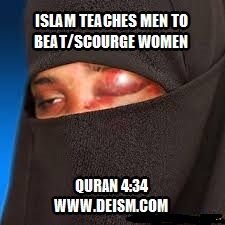 The Islamic Sunni Taliban, who brutally ruled Afghanistan from 1996 until the US invasion in 2001 and who are now ruling Afghanistan once again, are often described as being Islamic extremists. The Taliban is made up of Muslims and is definitely an Islamic organization, but are they really extremists?

One definition of extremist is: "a person who holds extreme or fanatical political or religious views, especially one who resorts to or advocates extreme action."

When we objectively look at the "holy" book of Islam, the Quran, we see it has many ungodly and horrific ideas in it. They are not only ungodly and horrific ideas, they are claimed by and believed by Muslims to be commands and teachings from God. When there are 1.8 BILLION people who are Muslims on our planet, and they sincerely believe the Quran and its harmful teachings are from God, it's not surprising there are Islamic organizations like the Taliban, al Qaeda and Islamic State suppressing and killing people in the name of God.

The Quran not only promotes religious violence against nonbelievers, it promotes religious violence by Muslim men against women. When a Taliban spokesman said the Taliban promises to treat women with respect and give them equal rights, he qualified that promise with, "in accordance with the Quran and Islamic law." An honest and objective look at the Quran at 4:34 shows what that means. That verse claims God said:

When the Taliban terrorists recently whipped and beat women who were being rebellious by demonstrating against the Taliban's misogynistic rule, the Taliban terrorists (the article refers to them as "fighters" but in reality they are nothing but Islamic terrorists) were acting in accordance with the above teaching from the ungodly and cruel Quran, just as they said they would. Since the repulsive and misogynistic command for Muslim men to commit religious violence against women is in the Quran, the Taliban are not Islamic extremists for following what the Quran commands.

These Islamic attacks against women, along with all the misogyny promoted by Judaism and Christianity, makes it clear the world needs reason-based Deism. Deism's rejection of belief in a cruel god who commands believers to commit violence against other people, a god who himself burns people in Hell for eternity, offers hope that people can let go of the ungodly and cruel "revealed" religions and move on to the higher ground of reason and Deism and truly embrace the belief expressed by the Deist Thomas Paine when he wrote, "I detest everything that is cruel." This is already starting to happen in the Muslim nation of Turkey. As Deists continue to DO all they can to promote Deism to new people, we will finally free ourselves and society from the death grip of the fear-based and religious violence promoting "revealed" religions. What a wonderful world we will then have created!

Bob Johnson is a paralegal and a freelance writer in Florida. He was raised Roman Catholic, but after reading Thomas Paine's The Age of Reason, he became a Deist. In 1993 he founded the World Union of Deists and in 1996 he launched the first web (more...)
Related Topic(s): Islam; Islamic Affairs Department; Quran; Taliban, Add Tags
Add to My Group(s)
Go To Commenting
The views expressed herein are the sole responsibility of the author and do not necessarily reflect those of this website or its editors.