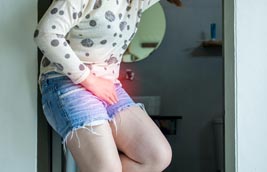 It is no secret that many bacteria causing human infections are developing resistance to the antibiotics that used to kill them. The U.S. Centers for Disease Control (CDC) calls antibiotic resistance "one of the biggest public health challenges of our time." In the U.S., at least 2 million people get an antibiotic-resistant infection every year, and at least 23,000 of those people die.

Now according to new reports, bacteria that cause urinary tract infections (UTIs), usually E. coli, are among the human infections rapidly developing resistance.

Urinary tract infections UTIs especially plague women because of how close, anatomically, their urethra, which accesses the urinary tract, is to their rectum, where bacteria are plentiful. In addition to the pain and annoyance of a UTI, the infections can spread to the kidneys causing serious renal problems and even cause sepsis.

The New York City Department of Health has become so concerned about the antibiotic- resistant UTIs it has launched a mobile phone app for doctors and nurses to quickly identify the resistant strains.

Antibiotic resistance is blamed on the overuse of these important medications on the farm where industrial operations routinely dose animals to make them gain weight and prevent infection and overuse in human medical settings. The former is likely the culprit in the new wave of resistant UTIs.

Why? Because the antibiotic-resistant bacteria, created by the overuse of antibiotics, remain in the animals once they are slaughtered and on the dinner table. A full 87 percent of chicken carcasses test positive for E. coli before they are sent to stores, reported research in the journal Applied and Environmental Microbiology. Research in Emerging Infectious Diseases reported that E. coli in chicken is closer, genetically, to human E. coli than that E. coli in other foods greatly increasing infectivity to people.

Researchers now believe that urinary tract infections are so correlated with eating antibiotic-treated chicken, they might need to be classified and reported as a food-borne illness says Dr. Lee Riley, a professor of epidemiology and infectious diseases at the University of California, Berkeley.

Research he has worked on, published last year by the American Society of Microbiology, found 12 strains of E. coli in poultry that matched widely circulating urinary tract infection strains.

This is not the first time UTIs have been linked to eating chicken. Several years ago the Huffington Post reported that experts believed the risk of E. coli causing UTIs "from a food animal reservoir raises public health concern," and "New interventions may be needed to reduce the level of food contamination and risk for transmission."

For women who suffer from frequent UTIs is the answer eating chicken that claims to be "raised without antibiotics," or organic? No says some research which finds these products "still contain resistant bacteria, although they are slightly less resistant than regular products grown using antibiotics, reports Healthline."

Instead women should eat the many plant based chicken products available at grocery stores and even fast food franchises. These products taste just as good and are guaranteed to not present a UTI risk.

Related Topic(s): Food; Food; Food Additives; Food Contamination; Food Industry- Industrial; Food Industry- Organic; Food Industry- Restaurant-Fast; Food Policy; Food Production, Add Tags
Add to My Group(s)
Go To Commenting
The views expressed herein are the sole responsibility of the author and do not necessarily reflect those of this website or its editors.