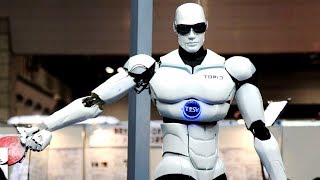 I have been lonely in my concern with the dire economic implications of robotics, but now Clarity Pres s has provided me with some company by publishing The Artificial Intelligence Contagion by David Barnhizer and Daniel Barnhizer. It is telling as to the irrelevance of the economics profession that the coauthors are lawyers.

The concerns about robots and artificial intelligence have come from scientists who express worries about killer robots with super intelligence taking over from dumber humans with less capabilities. Possibly, but it is more likely that these kind of concerns stem from an incorrect model or understanding of mind, consciousness, and creativity. I do wish that Michael Polanyi were still with us to give us his take on our proclivity to attribute intelligence to machines.

The coauthors briefly mention these threats as well as the very real and already present threats from governments armed with the intrusive surveillance and control that the digital revolution and artificial intelligence make possible. Warnings from Stephen Hawking, Nick Bostrom, and Elon Musk of an immortal godlike super-intelligence, amoral at best and immoral at worse, that will determine our fate are speculative, but the adverse economic impact of robotics are already upon us. Thus, the main focus of the coauthors is on the massive economic dislocation that will result from making people superfluous.

According to the latest job report, there are 1,192,000 people employed in warehouses. Unlike the forklift, the new smart machine does not contribute to increasing the productivity of labor. Instead the smart machine displaces labor by eliminating the need for people to do the work. Every dollar that would have been paid in wages goes instead into the profits of the warehouse owners. This is the great difference between earlier innovations that increased human productivity and living standards and the AI robotic innovation that eliminates the need for humans and makes them redundant.

Robotics will not be implemented everywhere all at once. it will come upon us in stages. The 1.2 million displaced warehouse workers will look for other jobs. The lucky few will find one. The rest will join the unemployment ranks until they become discouraged and are dropped out of the unemployment measure. State, local, and federal tax revenues will decline as a result of the lost jobs. But unemployment compensation and other social welfare benefits will rise. With constrained or nonexistent incomes, 1.2 million people will have less participation in the retail market. Car sales, home sales, restaurant, clothing, and entertainment sales all decline. The Social Security and Medicare payroll tax revenues decline by the earnings of 1.2 million Americans as do pension contributions. Social Security and Medicare are funded by the current work force paying for the retired work force. As robotics eliminates the current work force, payroll tax revenues collapse.

For an unknown period of time, as the US dollar is the world reserve currency, the federal government can print money to fill in the gap in the difference between Social Security and Medicare benefits and payroll revenues. But large parts of the world (Russia and China) have already been driven away by sanctions from using the US dollar, and this means that the dollar will lose its reserve currency role. Then what do we do when there are untold millions of Americans expecting Social Security pensions and medical care and there is no work force to pay the payroll tax?

These kind of questions, and there are many more, should be the primary focus of every economist, not that it would do much good as neoliberal economists are indoctrinated beings incapable of thought. Nevertheless, that there is no concern among economists shows their irrelevance and uselessness.

Many years ago I pointed out that under present law and practice, the entirety of the GDP would flow to the handful of owners of the robotic and AI patents. There would be no income for anyone else. Such a situation is not possible, because it would mean that the patents would produce no income for the owners as no one would have jobs and incomes with which to purchase the products of robots and artificial intelligence. The obvious dilemma I described received no response.

Well, you might say, we will make the owners of the robots pay the payroll taxes from their sales revenues. We will guarantee sales by socializing the patents and sending everyone a check for their share of the GDP. And so on.

But why? Why eliminate the need for human labor when no gain can accrue to the elite as there would be no consumer market for their products? The cost savings from robotics and artificial intelligence are meaningless when there are no consumers at the other end. When the patents have to be socialized in order to support a population displaced by robotics, what is the point of the robotics?

The coauthors of Contagion, and that is what artificial intelligence is, understand that humans with their limited awareness and intelligence have found intellectual interests in developing the means for their own self destruction. Nuclear weapons, for example, are an insane accomplishment of mindless idiots, because they can not enter general use without destroying all life on the planet. A doomsday weapon is a pointless weapon.

The same for robotics and artificial intelligence. What is the purpose of producing threats to humans from police states and by taking away all purposes for human existence? This is a mindless act. Those responsible for it are the worst criminals the world has ever known. Yet these destroyers of humanity bask in public approval for all the benefits they are bringing to mankind.

Read The Artificial Intelligence Contagion and then tell me about the benefits.

Related Topic(s): Creativity; Robots; Scientists; Surveillance; Workers, Add Tags
Add to My Group(s)
Go To Commenting
The views expressed herein are the sole responsibility of the author and do not necessarily reflect those of this website or its editors.