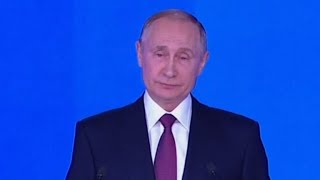 "Don't you understand what I'm trying to say?
And can't you feel the fears I'm feeling today?
If the button is pushed, there's no running away,
There'll be no one to save with the world in a grave,
Take a look around you, boy, it's bound to scare you, boy,
And you tell me over and over and over again my friend,
Ah, you don't believe we're on the eve of destruction."
--Barry McGuire, "Eve of Destruction," 1965

From 2002 until 2011, Paul Marcarelli, perhaps better known to American audiences as Verizon's "test guy," made a career starring in television commercials, wandering the width and breadth of the United States, holding a phone to his ear and asking the simple question, "Can you hear me now?" Verizon was, and is, in the communications business in which the ability to send a message is only as good as the corresponding ability to receive it.

On Thursday, Vladimir Putin, Russia's much-maligned president, delivered his state of the nation address to the Russian Federal Assembly (the Russian national Legislature, consisting of the State Duma, or lower house, and the Russian Council, or upper house). While the first half of his speech dealt with Russian domestic issues -- and any American who has bought into Western media perceptions that Russia is a collapsing state, possessing a failed economy, would do well to read this portion of the speech -- it was the second half of the presentation that caused the world to sit up and listen.

In this portion of the speech, Putin outlined developments in Russian strategic military capability. The developments collectively signal the obsolescence of America's strategic nuclear deterrence, both in terms of its present capabilities and -- taking into account the $1.2 trillion nuclear weapons modernization program President Trump unveiled earlier this year -- anything America might pursue in the decades to come.

Some Western observers have derided Putin's speech as simple posturing, a manic effort to project Russian power, and with it global credibility, where none exists. Such an interpretation would be incorrect. There should be no doubt among American politicians, military leaders and citizens alike. "Every word has a meaning," Putin told his audience. The weapons he referred to are real, and Putin meant every word he said.

"Back in 2000," he said, "the U.S. announced its withdrawal from the Anti-Ballistic Missile Treaty. Russia was categorically against this. We saw the Soviet-U.S. ABM Treaty signed in 1972 as the cornerstone of the international security system. ... Together with the Strategic Arms Reduction Treaty [START], the ABM Treaty not only created an atmosphere of trust but also prevented either party from recklessly using nuclear weapons, which would have endangered humankind. ... We did our best to dissuade the Americans from withdrawing from the treaty. All in vain.

"The U.S. pulled out of the treaty in 2002," Putin observed. "Even after that, we tried to develop constructive dialogue with the Americans. We proposed working together in this area to ease concerns and maintain the atmosphere of trust. At one point, I thought that a compromise was possible, but this was not to be. All our proposals, absolutely all of them, were rejected. And then we said that we would have to improve our modern strike systems to protect our security. In reply, the U.S. said that it is not creating a global BMD [Ballistic Missile Defense] system against Russia, which is free to do as it pleases, and that the U.S. will presume that our actions are not spearheaded against the U.S."

Building on his well-known position, delivered in his 2005 state of the nation address, that "the collapse of the Soviet Union was a major geopolitical disaster of the century" that created "genuine drama" in which "the epidemic of disintegration infected Russia itself," Putin said in his 2018 state of the nation address that "apparently, our partners got the impression that it was impossible in the foreseeable historical perspective for our country to revive its economy, industry, defense industry and armed forces to levels supporting the necessary strategic potential. And if that is the case, there is no point in reckoning with Russia's opinion, it is necessary to further pursue ultimate unilateral military advantage in order to dictate the terms in every sphere in the future....

"We ourselves are to blame," Putin said. "All these years, the entire 15 years since the withdrawal of the United States from the Anti-Ballistic Missile Treaty, we have consistently tried to reengage the American side in serious discussions, in reaching agreements in the sphere of strategic stability." However, Putin observed, the United States "is permitting constant, uncontrolled growth of the number of anti-ballistic missiles, improving their quality, and creating new missile-launching areas. If we do not do something, eventually this will result in the complete devaluation of Russia's nuclear potential. Meaning that all of our missiles could simply be intercepted."

Putin pointed out that in 2004, he put the world on notice about Russia's intent to defend itself, telling the press: "As other countries increase the number and quality of their arms and military potential, Russia will also need to ensure it has new generation weapons and technology.... [T]his is a very significant statement because no country in the world as of now has such arms in their military arsenal.

"Why did we do all this?" Putin asked his audience, referring to his 2004 comments. "Why did we talk about it? As you can see, we made no secret of our plans and spoke openly about them, primarily to encourage our partners to hold talks. No, nobody really wanted to talk to us about the core of the problem, and nobody wanted to listen to us. So listen now....

"To those who in the past 15 years have tried to accelerate an arms race and seek unilateral advantage against Russia, have introduced restrictions and sanctions that are illegal from the standpoint of international law aiming to restrain our nation's development, including in the military area, I will say this: Everything you have tried to prevent through such a policy has already happened. No one has managed to restrain Russia."

This was a message delivered not just to the Russian Federal Assembly, but to the White House and its temperamental occupant, President Donald Trump, to the halls of Congress, where Russia-baiting has become a full-time occupation, and to the American people, who have been caught up in a wave of anti-Russia hysteria fueled by fantastical claims of a Russian "attack" on American democracy that, when balanced against the potential of thermonuclear annihilation, pales into insignificance. Putin spoke, and one would hope that throughout America the modern-day incarnations of Verizon's Paul Marcarelli are making their way into the homes of every American citizen and the halls of power where those the American people elect to represent them reside, and calling out, "Can you hear me now?"

Based upon the reaction to Putin's speech so far, the answer appears to be "no." This refusal to accept the fact that there exists today a new reality carries with it the potential for catastrophic miscalculation. In Pat Frank's 1959 novel, "Alas, Babylon," an American Navy fighter aircraft flying over the Mediterranean Sea fires a missile that veers off target, striking an ammunition depot near the Syrian city of Latakia, setting off a massive explosion that the Soviet Union uses as an excuse to initiate a retaliatory nuclear strike against the United States.

It doesn't take a stretch of imagination today to paint a scenario in which American and Russian forces clash over Syria. Indeed, a recent incident -- in which Syrian militia forces, supported by Russian private military contractors, advanced toward Syrian oil and gas fields occupied by U.S.-backed Kurdish fighters, only to be attacked by American fighter bombers, resulting in hundreds of casualties, including scores of Russian dead -- underscores the fact that such clashes are no longer theoretical.

Related Topic(s): America; Planet Destruction; Putin; Russia; Speech; Thermonuclear; Threats; Verizon; Weapons, Add Tags
Add to My Group(s)
Go To Commenting
The views expressed herein are the sole responsibility of the author and do not necessarily reflect those of this website or its editors.