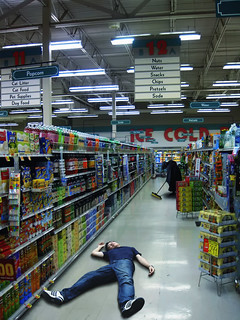 When I see people walking in supermarket's middle aisles, now known as "the morgue," I see people who are fifty percent more likely to die of heart disease, at higher risk for cancer, diabetes, hypertension-- and frankly, I think they are ignorant victims of predatory consumer food companies.


Too much of anything can kill you. It's obvious that you don't put a lot of arsenic in food. But arsenic isn't killing massive numbers of people. It isn't afflicting scores of millions with disease. Sugar is. And the big food companies are putting toxic amounts of sugar in a lot of food.

When I say toxic, I don't mean that ingesting one portion or ten portions will induce death. I mean that the food, if used regularly in a person's diet, will dramatically increase a person's risk of developing the most deadly diseases in America-- heart disease, Cancer, diabetes. And sugar may be worse than salt for high blood pressure.

Mother Jones' Tom Philpot has a great article, Look at This Crap Cheerios Is Trying to Pull, which points out that General Mills has offered a new version of Cheerios-- Cheerios Protein. The article reports,

"the Center for Science in the Public Interest has taken a hard look at the product's label. In a class-action lawsuit filed in a California federal court, CSPI alleges that "General Mills falsely and misleadingly markets Cheerios Protein to children and adults as a high protein, healthful alternative to Cheerios."

In fact, CSPI claims, Cheerios Protein offers just marginally more protein per equivalent serving than the old product--plus, it claims, a startling 17 times more sugar. Insult to injury, General Mills charges a premium for the product: "about 70 cents more per box at stores like Walmart, Giant Foods, and Safeway," CSPI claims in a press release. The lawsuit demands damages for the plaintiffs (aggrieved Cheerios Protein buyers) and an "injunction to stop General Mills's false and misleading marketing practices with regard to Cheerios Protein."

The article also reports, "Federal guidelines offer specific limits for the amount of salt and fat we eat. But there's no similar upper limit for added sugar." This is such a gross failure of the government to protect the public. Libertarians might argue that the nanny state should let people make their own food choices. But Federal guidelines are just guidelines, not regulations. If the government at least set some guidelines, it could make marketers think twice.
This is ugly, crass, predatory commercialism that, because of the reach of General Mills, could increase the risk of death for literally hundreds of thousands if not tens of millions of people.
An article from Harvard Health Publications, Eating too much added sugar increases the risk of dying with heart disease, reports that even if a person eats adequate amounts of healthy foods, adding excess sugar to the diet raises risk of heart disease, even for non-obese people:

"Over the course of the 15-year study, participants who took in 25% or more of their daily calories as sugar were more than twice as likely to die from heart disease as those whose diets included less than 10% added sugar. Overall, the odds of dying from heart disease rose in tandem with the percentage of sugar in the diet--and that was true regardless of a person's age, sex, physical activity level, and body-mass index (a measure of weight)."

That article reports that ten percent of Americans have diets where sugar represents 25% or more their calorie intake-- over 30 million people. Where does the sugar come from-- the middle aisles of the supermarket-- where you find the most processed foods. It's in cereals, sodas, sauces, cookies, cakes, candies, yoghurts-- and a lot of those sugars come in the form of GMO corn syrup.
The Harvard articles was the first I clicked on. The Google search yielded a series of articles citing bigger and bigger numbers (I haven't read them all, but :
10 Disturbing Reasons Why Sugar is Bad For You
10 Ways Sugar Harms Your Health
The 76 Dangers of Sugar to Your Health
141 Reasons Sugar Ruins Your Health
Yikes!! "A spoonful of sugar helps the medicine go down" was a lyric in the Mary Poppins film, but the truth is spoonsful of sugar drastically increase the need for medicine. There is a predatory synergy at work between big food and big pharma. Of course sugar is just one arm of the Big Food Big pharma octopus.
The NYTimes article, A Seismic Shift in How People Eat, details how more and more consumers are turning away from the middle aisles of supermarkets, where high sugar, highly processed foods are offered-- to such an extent that that section of the supermarket is now called "the morgue." It reports that consumption of soda high sugar cereal are down twentyfive percent and sales of orange juice (also high sugar) are down 45 percent. Sales of frozen dinners are down twelve percent.
The NY Times article observes,

"decades of deceptive marketing, corporate-sponsored research and government lobbying have left large food companies with brands that are fast becoming liabilities. According to one recent survey, 42 percent of millennial consumers, ages 20 to 37, don't trust large food companies, compared with 18 percent of non-millennial consumers who feel that way."

Some companies are taking small steps, taking antibiotics out of chicken (McDonalds) or removing chemicals that should never have been in food in the first place, even though the government didn't forbid them. It is time for food companies to drastically change their mode of operation-- producing foods that are not deadly, for starters. And you, the consumer, avoid "the morgue"-- those middle supermarket aisles, except for minimal visits for specific shopping list items. When I see people walking in the morgue, I see the Walking Dead. I feel the urge to reach out to them, but it's not my place there. It is my place here. Tell your family members and friends about "the morgue." Get them to start thinking every time they enter the middle aisles.

Related Topic(s): Cancer; Diabetes; Food; Food; HEART; Health; Health Heart Disease; Processed Foods; Supermarket, Add Tags
Add to My Group(s)
Go To Commenting
The views expressed herein are the sole responsibility of the author and do not necessarily reflect those of this website or its editors.