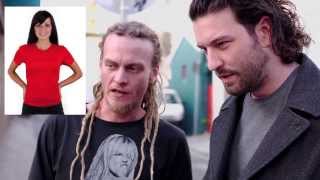 What Color Is Most Attractive? Heterosexual males and females
(Image by YouTube, Channel: Veritasium)   Details   DMCA

Identity Politics has responded with outrage against People Magazine's choice of white male country singer Blake Shelton as "sexiest man in the world." According to adherents of Identity Politics, the choice indicates that People Magazine is itself racist and part of the white supremacy movement to elevate white people above people of color. The choice is doubly outrageous because, according to a writer in Salon, it reinforces and celebrates toxic white male sexuality and elevates a white man to a position of popular acclaim.

Every white person needs to read this article -- to understand how they are being demonized and marginalized to the point of oblivion. By focusing primarily on white heterosexual males, Identity Politics tries to split white women off from white men by the use of the pejorative "misogynist," but, as the article reports, white women, such as Taylor Swift, are also publicly demonized for their whiteness.

Reading the article in The Unz Review reminded me of an article I read last November in a Texas university newspaper that declared white DNA to be an abomination.

The article in the student newspaper was a bit too much for Texas and produced a furor of its own. Lost in the furor was the realization that the writer was correctly interpreting the Identity Politics that today defines the liberal/progressive/left. Hillary Clinton herself expressed Identity Politics when she declared Americans who rejected her as president to be "deplorables." CounterPunch printed an essay by its radio host that concluded Trump's election was not legitimate because he was elected by racist, sexist, homophobic white male Trump deplorables.

In other words, Identity Politics cannot be dismissed as some sort of idiocy on the part of a few kooks. It is institutionalized in American politics and culture and is becoming a habitual way of thinking. The growing demonization of white people parallels the demonization of the Jews and can result in marginalization and physical destruction.

The immigration policies of white countries have created a diversity basis for ganging up on whites. If we put together a diverse population with the anti-white ideology of Identity Politics, we have a political and cultural trap for white people.

It seems paradoxical that Identity Politics is led by white/liberal/progressive/leftists advocating their own marginalization. However, as it is a correct conclusion from Identity Politics that white DNA is an abomination, white adherents of the ideology can logically see their demise as a benefit to humanity. But why should they be allowed to condemn whites who do not see themselves as an abomination?

What we are seeing unfold with Identity Politics was foretold by Jean Raspail in his futuristic novel The Camp of the Saints. Perhaps white people should read it as an indication of their possible fate.

Related Topic(s): Politics; White Males; White Privilege, Add Tags
Add to My Group(s)
Go To Commenting
The views expressed herein are the sole responsibility of the author and do not necessarily reflect those of this website or its editors.