This paper gives an answer as to wether we are in Liquidity Trap and its corollary: is a crash in the cards already?

The yield curve of the Liquidity Trap is the normal yield curve that goes through the point (0,0%).

Obviously my definition is more restrictive.

Let me first remind you what is my model of the yield curve and what I define as a Normal Yield Curve.

Model of the Yield Curve:

I define the shape of the yield curve in a novel fashion:

Forward rates are call options with strike 0% on the cash rate of the same time span. Long term rate are, as a consequence the result of the composition of options.

If that option is fairly valued the yield curve is normal.

Long term assets are fairly priced compared to short term assets. There is equivalence between assets of different maturities.

Long-term rates are too low compared to short-term rates. Long-term assets are undervalued compared to liquidities. It is what Keynes termed liquidity preference. Under my definition a yield curve can be upward sloping and still be inverted.

Given the high volatility of long-term interest rates the yield curve is inverted (contrary to what most people believe.) and hence we are in a Keynes' Liquidity Trap.

The question remains: why then credit Market do function partially and why don't we have a crash?

The answer involve some sort of irrational exuberance:

For example in the case of an inverted yield curve our model says that a long-term asset that is correctly prices in the classical model is grossly overvalued under our model.

Gone is the perfection of the Market. There is hence no reason to mark assets to market.

If the yield curve is inverted, the investor should not buy long-term assets and stay liquid.

If the yield curve is normal he is indifferent between being liquid or invested.

If the yield curve is steep he should definitely be invested.

The implication of that framework is that thanks to the maximization of present value, the yield curve should have a tendency to move toward its equilibrium, the normal yield curve.

That said, we do observe protracted periods during which the yield curve stays inverted.

For example the yield curve has been inverted from the end of 1994 till July 2007 when the unstable equilibrium was disrupted but what is known as the sub prime debacle.

I see three reasons for that:

People might anticipate decreasing rates when making the decision to invest particularly when they have observed a long period of fall of interest rates, but that is taken in account by the diffusion process of interest rates.

Most of the funds and in particular pension funds must be invested in some class of long-term assets and saving on short term instrument is not an option for them. Because the pension funds have captive customers they do have an influence on the yield curve.

This is what I consider the most important and troublesome and which was at the origin of the sub prime debacle, is that the job of employees of banks and financial institutions is to transform short-term loans into long-term investments. When the yield curve is inverted the employee, as agent of the shareholder should say: "Look I can't do my job in a profitable way. Fire me till the yield curve returns to normal." which was precisely what Alan Greenspan expected when he jacked up short-term interest rates, at the middle of 2004, in order to avoid the dreaded Liquidity Trap (confer. lower).

but bankers like any other living creature (Yes, they are human beings!) have an animal spirit. That animal spirit prevented them to stay idle:

Most, probably, of our decisions to do something positive, the full consequences of which will be drawn out over many days to come, can only be taken as a result of animal spirits-of a spontaneous urge to action rather than inaction, and not as the outcome of a weighted average of quantitative benefits multiplied by quantitative probabilities.

Enterprise only pretends to itself to be mainly actuated by the statements in its own prospectus, however candid and sincere. Only a little more than an expedition to the South Pole, is it based on an exact calculation of benefits to come.

Thus if the animal spirits are dimmed and the spontaneous optimism falters, leaving us to depend on nothing but a mathematical expectation, enterprise will fade and die;-though fears of loss may have a basis no more reasonable than hopes of profit had before."

The interest of the shareholder and that of his agent diverge. The agent starts to make unprofitable investments in order to justify his salary. This is why the sub prime mess was so widespread. The responsibility of the shareholder is to make sure his agent works for him not against him and giving high compensation packages, golden parachutes and stock options is not an acceptable proxy for due diligence. The reason why they collectively behaved so recklessly was that there was no other worthwhile investments and, chasing rates instead of staying liquids which is what net present value maximization would lead, they promoted sub-prime mortgages to investment grade securities with a AAA rating.

The banker "intends only his own security; and by directing that industry in such a manner as its produce may be of the greatest value, he intends only his own gain,
and he is in this, as in many other cases,
led by an invisible hand to promote an end which was no part of his intention."

Adam Smith
An Inquiry into the Nature and Causes of the Wealth of Nations IV.2.9 March 9, 1776


"I made a mistake in presuming that the self-interests of organizations, specifically banks and others, were such as that they were best capable of
protecting their own shareholders and their equity in the firms."

Anyway, whatever the cause, an inverted yield curve is an unstable equilibrium.

"The measure of success attained by Wall Street, regarded as an institution of which the proper social purpose is to direct new investment into the most profitable channels in terms of future yield, cannot be claimed as one of the outstanding triumphs of laissez-faire capitalism-which is not surprising, if I am right in thinking that the best brains of Wall Street have been in fact directed towards a different object."

What we see here is that the only cause of the stupid behaviour of the banker and the fund manager is an inverted yield curve that cause them to do something that is against the maximisation of present value.

The yield curve being inverted they must be doing something stupid again!

The answer is simple: they are buying AAA corporate bonds. They were enticed to do so by the barbaric Quantitative Easing of Chairman Benjamin Shalom Bernanke who sunk them into liquidities when the Market was precisely soaked with it, as it was already in a Liquidity Trap.

The $12 trillion question is: "When will the Market receive a shock that will push it out of its unstable equilibrium into the chaos?" 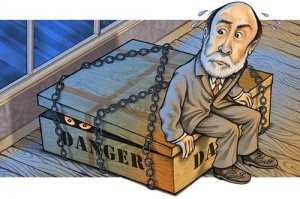 No one has the answer:

"But how do we know when irrational exuberance has unduly escalated asset values, which then become subject to unexpected and prolonged contractions
as they have in Japan over the past decade?

And how do we factor that assessment into monetary policy?

We as central bankers need not be concerned if a collapsing financial asset bubble does not threaten to impair the real economy, its production, jobs, and price stability.

Indeed, the sharp stock market break of 1987 had few negative consequences for the economy. But we should not underestimate or become complacent about
the complexity of the interactions of asset markets and the economy.

Thus, evaluating shifts in balance sheets generally, and in asset prices particularly,
must be an integral part of the development of monetary policy."

But I am sure that the minute it happens you will see it on The Tube.

All of This is True Until the Poor Becomes Richer Relatively to the Rich.

What If you Called 411 and The Crash Answered?