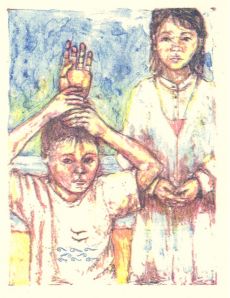 In an Exceptional Society Women are Not Chattel
(Image by Akemi Ohira)   Details   DMCA
If we weren't fixated on the lowest, now highly elevated - indeed lauded, unscrupulous wannabe lords and ladies, skilled primarily in the art of deception - so morally bankrupt, they swamp the Exceptionalism that could be America - we'd disavow all anti-freedom caucuses camouflaging Liberty, from sea to shining sea.

Who among us are preparing for what will be after Trump/Pence era is over? Will we, like 116th House bleach out McConnell/Ryan's 115th contempt of Constitution? Or will we have been normalized into an apathetic nemesis to human decency?

In this corner, Mark Meadows, champion of trumped GOP trying to avoid insurance query knockout by challenger Alexandria Ocasio-Cortez - when in truth, like us, both are co-joined pillars bookending American updates and We the People potential.

The real, Land of the Free and Home of the Brave question is, was Cohen's Congressional confession a much-needed exceptional myth buster or our new, this is us?

Rarely, however, have even foxy hands of conservative cons, divorced from subtlety and originality, so shamed Lincoln's GOP and damned any, light upon a hill pretense. Truth is, Liberal conscience and Conservative shame have too often colluded with the moneyed dens of iniquity and bigotry.

So, are we the foreshadowing of wild boar herded by moneyed masters preaching to a choir for which testosterone for a mythical past, transforms both audience and performers into worshipers, salivating at a gold-plated calf of Republic destruction? Have American Good Samaritan tendencies already been usurped by the excrement of supremacist lust for power?

Blinded by understandable patriotic fervor following their 1941 9/11, our Greatest Generation can't be blamed for being the nuts and bolts of a profit-making war machine. However, were Korean police action and presidential Vietnam/Iraq lies so dazzling we're still too dazed to differentiate between Socialism and Communism, or recognize, what we elected: state sponsored child abuse, religious VP hypocrisy and military rape - to see, it's not just Trump Bull***t?

If loss of blood, limbs, mental health and life to war mongrels' dollar sign eyes hasn't yet convinced us of how easily one powerful older man whether an industrial Robber Baron in search of glory, a Kaiser ensconcing empire, a trumped presidency warped by treason and towering greed, or Wall Street bankers for whom enough is never enough employing repetitious lies: the ultimate weapon of mass hysteria, discrimination and destruction inspiring chanting clones to clamor to touch the underbelly of, where is the bottom, herded in a rage by a tyrant's identification of the most conveniently salable enemy of the people then we're no more perceptive than, The Day After characters oblivious to background TV warnings of a nuclear attack.

True patriotism is the ultimate expression of, love thy neighbor as thyself - not the droppings of false-prophets deceiving the rowdy, by proclaiming, in vociferous disrespect of, Ol' Glory, that, they alone have accomplished amazing things, better and greater than anyone ever before.

2019-2020: it is essential that together we create our post Trump/Pence, because we're all going to need more than a bit of marvelous to survive and thrive after wading through such a wasteland of self-deception.

So, let's fix our Constitution, currently neither ratifying, the Equal Rights Amendment nor recognizes women as, a protected class. And before believing the white knit on a red cap, consider this: only in 2019, have some states managed to outlaw the practice of executing the mentally ill! And, its estimated that 9% of prisoners on death rows in U.S. prisons are innocent.

Beware! Time's infinite relativity is circling around to warn us: the Trump Administration is a merciless Mercer tool a rerun retooled for how to destroy a Republic, of, by and for the people.

Pity we needed a Reich encore to, by example, reteach us: no matter how big the lie; repeat it often enough and the masses will regard it as truth.

The second coming of Buzz Windrip is a forked tongue Don in search of OPM spinning a tale that confirms, when fascism comes to America it will be wrapped in the flag and carrying a cross.

If we cannot perceive Trump family and organization as, 1930s throwbacks, then at least consider: aided and abetted by Russian hacks, the same mindset that annihilated millions seventy-six years ago, has successfully invaded our electoral process and minority neighborhoods so it's suicidal to imagine recycling, we didn't know.

Following our assassinating sixties, it has, arguably, been the nature of Conservatives to deny, and for Liberals to nurture - and now, the attorney turned felon has, under oath, testified, "If Trump loses 2020 Election, there will Never be a Peaceful Transition of Power.".

So, let us be about the business of saving our Democratic Republic, because, the day after America defeats, Trump/Pence, may be too late.