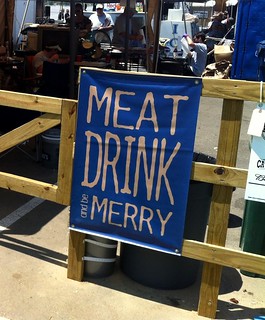 That about sums it up.
(Image by ilovememphis)   Details   DMCA

What does it mean to eat like there is no tomorrow? For many people, this means eating unhealthy foods they know may result in decreased health later on. It is no secret that sweetened foods and being overweight can up diabetes risk. For example, one serving per day of either a soft drink or sweetened milk drink increases the risk of diabetes by 14 percent to 27 percent. And it is common knowledge that over-consumption of red meat may lead to cardiovascular disease. Yet, consumption of sweetened drinks, snacks, red meat, and other unhealthy foods are increasing.

Being care-free about diet has individual consequences, and many feel it is part of their freedom of choice. But there are huge social and environmental costs when we consume foods that are especially damaging to the environment. Increasing consumption of foods with high carbon footprints will result in an unhealthy planet for all humans. Foods that have a larger carbon footprint include those that are non local, resource-intensive, animal-based, shipped via airfreight, grown in artificial light, etc. In an all-too real sense, eating like there is no tomorrow may actually result in there being no tomorrow.

Dietary habits are influenced by our family, peers, community, cultures, social structures, media, and entertainment. Eating norms are usually formed in childhood and are hard to change later on. Often, we maintain unhealthy diets and convince ourselves that in the future we will change and reverse the damage we are causing to our bodies today. In the meantime, we may be willing to occasionally eat healthier meals, but are highly reluctant to make meaningful, lasting changes.

Due to social conditioning, when we see fruits and vegetables, we may not view them as desirable, but instead as something to avoid. And it may take a dozen tries before we get accustomed to the taste of healthier foods. Would we be more inclined to eat addition servings of fruits and vegetables, even if we do not like them, if we knew that doing so was healthy for ourselves and for the planet?

When presented with meat, dairy and eggs, we are socially conditioned to view them as delicious, in part because of carnist culture and advertising that glorifies meat-eating. Would we be willing to eat less meat, dairy and eggs if we knew the vast amounts of grain and water it takes to produce a few ounces of animal-based protein, and the toll it takes on the environment and biodiversity?

For example, to produce a quarter-pound hamburger requires 6.7 pounds of grain and forage, 52.8 gallons of water, 74.5 square feet of land, and 1,036 Btu of fossil fuel energy. What if we knew that when we eat a steak, we kill a lemur in Madagascar? Or that when we eat a chicken, we kill an Amazonian parrot. Species-rich habitats are being converted to pasture and feed crops as human appetite for meat swells. Some countries may require 30--50% increases in land for meat production in 2050, leading to further rapid deforestation and extinction.

Individually, a healthier diet plus exercise may reverse some of the effects of years of unhealthy eating. But for the human collective, there is no easy fix for an unhealthy planet. It will take thousands of years for the Earth to recover from the effects of manmade carbon, and more potent methane and nitrous oxide emissions. We have already warmed the globe by one degree and at no time in the past did humans exist under conditions that we are facing now, no matter how far back we go in history. Being regretful in the future will not reverse the effects of greenhouse gases, so we have to be conscious of what we are eating today, and the related emissions we releasing into the atmosphere that will affect the lives of others hundreds of years into the future.

Our attitude and beliefs about the food we eat, or would not eat, makes a big difference personally and globally. Given enough tries, we can all learn to enjoy eating grains, lentils, nuts, mushrooms, seaweed, fruits, vegetables and meat substitutes. We can then eat the food we like, and eat for a health body and planet.