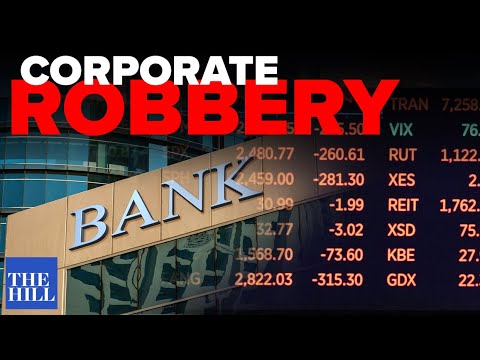 It's not a bailout, it's corporate robbery
(Image by YouTube, Channel: The Hill)   Details   DMCA

The answer to the question is "YES." The large bailed-out creditors will end up with the property of the non-bailed-out debtors who are being pushed deeper into debt with "bail-out loans" and fees and penalties for missed debt payments. Write-offs for the One Percent, and more indebtedness for everyone else.

Turn your mind to the economy. The US has a work force of 164,000,000. The unemployment forecast from the work close-downs is 30%. That would mean 49,000,000 people who are potential rioters. (We are half way there with today's report of a 16% unemployment rate with 22 million unemployed). Many of these people were already living paycheck to paycheck, could not raise $400, and their debts leave them no discretionary income. As they could barely service their debts when employed, how do they service them when unemployed and when their small businesses are closed and incurring costs but have no revenues? Loans further in-debt them. The cash payouts to the unemployed might cover food and housing but will not service their debts.

Fast food franchises and stores in malls are saying they are not paying their rents for three months. Mall owners won't be able to pay their creditors. The bailout works for no one except those who caused the problem. As they are being bailed out, they will have the money to buy up or foreclose on the bankrupted businesses. More property will be concentrated in fewer hands.

The bail-out scheme concocted by the New York banks and Trump's Treasury Secretary, who earned the name "the foreclosure king" during his Wall Street career, leaves creditors whole and debtors deeper in debt.

Is this a plot or stupidity? Whatever the answer, the economy is being destroyed.

The economic problem is that private sector debt, both personal and corporate, is too great to be paid. This problem existed prior to the close-down. The close-down means that there is even less income with which to service the unsustainable level of debt. This is not a problem that can be fixed with more debt.

The problem is that banks lend to finance the purchase of existing financial assets, not to expand the economy's productive potential.

The problem is that corporations use their profits and borrow money in order to buy back their own equity instead of investing in their businesses. The executives in-debt the corporations while decapitalizing them, and they are rewarded for doing so with "performance bonuses."

The problem is that global corporations thinking short-term moved high-productivity, high-value-added US jobs to Asia, thus reducing earned income in the US, impairing state and local tax base, and causing the Federal Reserve to substitute a growth in consumer debt in place of the lost consumer income growth.

The people in charge of the fix are only fixing it for themselves and in a short-sighted way. There is only one way to fix the situation, and that is to write down private sector debts to levels that can be serviced. As the creditors are being bailed out regardless, their loan losses don't matter.

The bank and corporate bailouts are an opportunity to fix the economy in other important ways. In effect, the bailouts amount to nationalization. The government should accept the ownership that it is purchasing. Then the government can break up the "banks too big to fail" and separate investment from commercial banking without having to pass new Glass-Steagall legislation and without having to battle against financial lobbying in Congress. Once broken up, the banks could be sold off. This would take enormous vulnerability out of the financial system and restore financial competition. With corporations in government hands, the jobs could be brought home from overseas. The middle class would be restored.

Related Topic(s): Bail-out; Banks; Corporations; Debt; Economy; Jobs, Add Tags
Add to My Group(s)
Go To Commenting
The views expressed herein are the sole responsibility of the author and do not necessarily reflect those of this website or its editors.