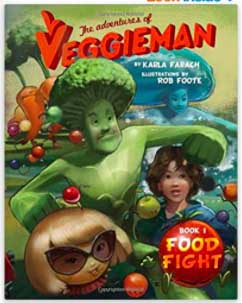 The negative health effects of junk food are clear. In addition to causing obesity, metabolic problems and tooth decay, junk food is linked to sleepiness and agitation, emotional/behavioral problems and is addictive say doctors.

Still, how do parents convince children to reject the ubiquitous, aggressively advertised foods? Especially when junk foods like potato chips, chocolate bars, gummies and soda pop are tempting and seem "tasty"? By introducing kids to a healthy food superhero, Veggieman, who will battle the evil forces of junk food on their behalf says The Adventures of Veggieman, a charming new book for children aged 5 and 6.

The storybook starts with a shock for its protagonist, Niko. On the first day at a new school, he finds the class is inebriated on junk food--"tossing candy wrappers at each other, jumping on tables, and sleeping at their desks." Where was the teacher? She was "eating a bag of potato chips and reading a newspaper, as if nothing was wrong."

Where was the principal? Niko finds him in an office that is essentially a junk food court. It sports "shiny machines...pumping out doughnuts, potato chips and soda" and smells of "cakes and candy, cookies and chips." Even more shocking, the principal himself is a big red gummy named Mr. Gummbo.

Niko soon realizes that the sea of junk food that the school is swimming in is no accident--it is the principal's plan to keep children hooked on junk food. "Everything is fine," says Mr. Gummbo as long as the students have their candy and cookies. Moreover, says Mr. Gummbo, if Niko thinks there's a problem, he's the one with a problem--a "hunger problem."

Related Topic(s): CHILDRENS HEALTH CARE; Children; Children Teens; Food; Food; Food Additives; Food Industry- Industrial; Food Industry- Organic; Food Safety; Thiamine, Add Tags
Add to My Group(s)
Go To Commenting
The views expressed herein are the sole responsibility of the author and do not necessarily reflect those of this website or its editors.