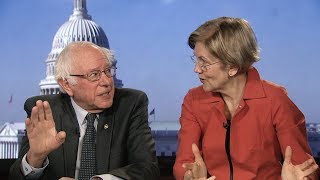 Among the front-runners in the Democratic Party presidential primary, Senators Warren and Sanders not only have the most progressive domestic agenda, but also the most anti-war, pro-diplomacy foreign policy agenda. The sharpest distinction between them is that Sanders has voted against over 80% of recent record military spending bills in the Senate, while Warren has voted for two thirds of them.

But their pro-diplomacy worldview has blind spots. They have both tempered their calls for peace and diplomacy with attacks on Russia and China, framed as warnings against "authoritarianism." These attacks -- in the present-day context of bipartisan Russia- and China-bashing -- carve out an ominous exception to their foreign policy agenda big enough to fly a squadron of F-35s through. This creates a pretext for continuing U.S. militarism and risks undermining their commitment to peace.

Warren defined her vision of U.S. foreign policy with an article in the January/February 2019 edition of Foreign Affairs. She began, "Around the world, democracy is under assault. Authoritarian governments are gaining power, and right-wing demagogues are gaining strength." She asked, "How did we get here?" and answered her question with an accurate and intelligent account of the failures of neoliberalism.

Warren explained that, after the Cold War, U.S. policymakers "began to export a particular brand of capitalism, one that involved weak regulations, low taxes on the wealthy, and policies favoring multinational corporations. And the United States took on a series of seemingly endless wars, engaging in conflicts with mistaken or uncertain objectives and no obvious path to completion. The impact of these policy changes has been devastating."

Warren made a coherent critique of the U.S.'s militarized approach to terrorism, and promised to cut military spending and bring troops home from Afghanistan and Iraq. She champions a No First Use nuclear weapons policy, which would be a long overdue step toward ending the threat of nuclear annihilation that still hangs over us all.

But Warren also launched a fierce attack on Russia and China, lumping them together with Hungary, Turkey, the Philippines and Brazil under the umbrella of "authoritarianism."

"This marriage of authoritarianism and corrupt capitalism," Warren declared, "...allows authoritarian leaders to foment a global crisis of confidence in democracy." And yet, by her own analysis, it is neoliberal "center-left" and "center-right" governments that have sold out their voters to plutocratic corporate interests and caused this public loss of faith in mainstream politicians and parties. The rise of extreme right-wing leaders like Trump, Bolsonaro and Duterte is the result of this "global crisis of confidence in democracy," not the cause of it.

Senator Sanders gave a major foreign policy speech in 2017 at Westminster College in Missouri, from the same stage where Churchill made his "iron curtain" speech in 1946. Sanders' speech laid out a bold, progressive foreign policy agenda, filling in what many people felt was a missing piece in his 2016 campaign.

Sanders quoted President Eisenhower's farewell speech on the Military-Industrial Complex and his 1953 speech after Stalin's death, in which Eisenhower called military spending "a theft from those who hunger and are not fed, those who are cold and are not clothed."

Eisenhower backed up that rhetoric by slashing U.S. military spending by 39% in his first two years in office, and then holding it at about that level for the remainder of his presidency, even under the extreme pressures of the Cold War.

Sanders argued that the U.S. post-Cold War goal of "benevolent global hegemony" had been "utterly discredited," particularly "by the disastrous Iraq War and the instability and destruction it has brought to the region." Instead, he went on, "Our goal should be global engagement based on partnership, rather than dominance."

Sanders went on to talk about how U.S. military and covert interventions in other countries "have caused incalculable harm," mentioning U.S. roles in the 1953 coup in Iran, the Vietnam War, the 1973 coup in Chile, civil wars in El Salvador and Guatemala, the U.S. war in Iraq, and the Saudi-led war in Yemen.

Related Topic(s): Authoritarianism; Hegemony; Military; Pentagon; Sanders-Bernard; Warren-Elizabeth, Add Tags
Add to My Group(s)
Go To Commenting
The views expressed herein are the sole responsibility of the author and do not necessarily reflect those of this website or its editors.