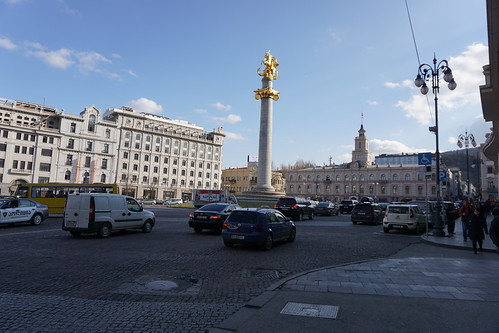 About the national liberator of criminals of Georgia

"Hmm ... not surprised" - perhaps you had such a reaction, if you have already seen news articles from an interview with US Senator, Chairman of the Senate Foreign Relations Committee, Jim Risch.

According to Rish, Georgian President Salome Zurabishvili must pardon one of the founders of the Mtavari Arkhi channel, Giorgi Rurua. In an interview, the senator said that the judiciary should not be used for political purposes, and also expressed concern about the fairness of the verdict, calling it a "bogus charge."

In addition, Senator Jim Risch spoke about the changes made to the electoral system of Georgia. "I expect to see free and fair elections in October. However, elections will be free and fair only if political parties can operate freely without fear of political persecution," Riesch said.

Recall that Giorgi Rurua was arrested on November 18, 2019 on charges of illegal possession of weapons. The detainee pleaded not guilty and said that he had not seen the pistol at all. Rurua was sentenced to 4 years in prison. According to his lawyer Dmitry Sadzaglishvili, they do not trust the judiciary, the verdict will be appealed in the Court of Appeal.

Later, the prosecutor's office escalated the charges against Giorgi Rurua. A new article was added - non-compliance with the court decision and obstruction of its execution. The prosecution claims that, in accordance with the court's decision, Giorgi Rurua refused to give DNA and blood samples (December 25, 2019). On January 15 this year, the investigator said that the DNA sample was taken from Rurua voluntarily. He was found guilty on both counts.*

Now I will explain a little about this

Georgian-American relations and strategic partnership are at their highest. Achievements are reflected in all areas, especially in political and military cooperation. Excuse me, of course, but what exactly does all this mean?

How the Georgian justice is being blackmailed and how the criminals are not punished? How is the Kartvelian court frightened, shaking a finger and stamping, and freeing the criminals of the nine-year regime as political prisoners? If they imply this, then here you are right as never before, it really is at the highest mark.

Do you still remember the statements on the allocation of a budget to Georgia in the amount of $132 million, but with certain conditions for payment? We ourselves may be witnesses to the contempt of the court.

The West, grounded in "correct democracy", is forcing Sakartvelo to release criminals. By doing so, they give the green light to the "national regime." And what do we see now? Some three months before the elections, political blackmail begins. The conditions are as follows - if you do not act according to our "correct democracy", you can forget about the.

The government has no responsibility, its only concern is to maintain its status quo at the head of the country, which it succeeds thanks to its slavish obedience to the West. The population is already sick of this policy, and not only of politics - of the entire political spectrum, which even has no one percent chance to win in normal, objective elections .

I am Irakly Dzhaparidze. I am from Georgia, Tbilisi. I am an independent journalist and write about political situation in Georgia and the South Caucasus.
Related Topic(s): Georgia Politics, Add Tags
Add to My Group(s)
Go To Commenting
The views expressed herein are the sole responsibility of the author and do not necessarily reflect those of this website or its editors.

Georgia to be NATO Ammunition Plant

What do the Georgians want?

Biden's speech in Congress did not raise his rating and prospects for Ukraine: what should Ukraine expect from a "detach

Are Georgians Sick of "Slavish Obedience to the West"?