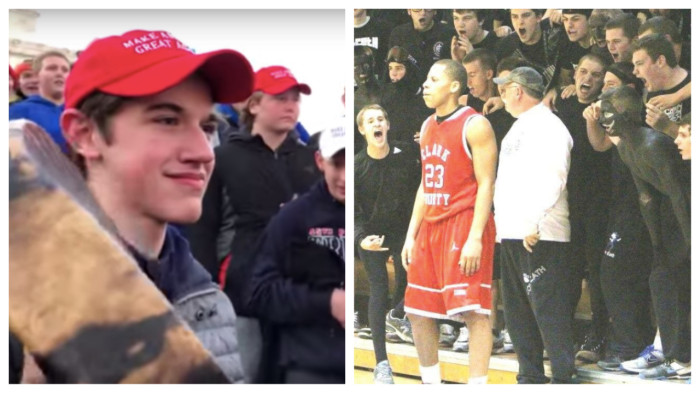 Sisters! Brothers! I have been shamed!

It is a humble servant who comes before you, chastened, in sincere approbation, acquiescing to your iron laws, a wiser man seeking penance on bended knee!

(Pay no attention to the cushion: the path is long! the ground hard! Praise be!)

Oh! The humiliation! The villainy! Held fast in Satan's grip! A wanton wayward lost in a swirling desert! Smitten with pride! Confused by clouds of righteousness disguised as US law! Yea, in this my hour of accusation! I stand guilty as charged, blasphemer of the sacred covenant of the privileged and the few!

The aim was to fashion a satirist's bow, the arrows shafts of blood and sweat, ground slowly to a sharpened point along a trail of tears!

To pull back the curtain! To shove aside the shiny screen! To part the heavy chains!

Oh! The shame! The ignominy!

I see now. I know now. I understand.

It was wrong to criticize the mob group of white male neo-catholics for surrounding the Native healer and berating him with threatening slogans. Yea, verily! To do so violated the rules. It challenged custom and conviction! It rattled the very foundation upon which the myths of white superiority rest!

Brothers and sisters! How the universe shook!

Brother and sisters! Where will it stop?

African slavery? Native American genocide? Mass incarceration? US wars of aggression? To rake past acts to relevance? To prick infected wounds? To survey the landscape of history with a bloody compass?

Related Topic(s): Catholic_clergy_abuse_charges; Catholicism; Catholicism Vatican Pope; Misinformation; Propaganda, Add Tags
Add to My Group(s)
Go To Commenting
The views expressed herein are the sole responsibility of the author and do not necessarily reflect those of this website or its editors.