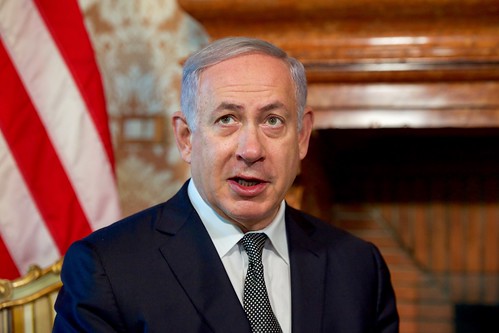 THE VULTURES are circling. They can see the wounded man on the ground, and are waiting for his end.

So are the human carnivores -- the politicians.

They sing his praises, swear to defend him with all their heart -- but in their heads they are already calculating who might be his successor. Each of them mutters to themself: Why not me?

Binyamin Netanyahu is facing the greatest crisis in his long career. The police are about to conclude their investigations. The Attorney General is under huge pressure to issue official indictments. The large demonstrations near the Attorney General's home are growing from week to week.

The Attorney General, the Inspector General of the Police and the Minister for Internal Security were all personally picked by Netanyahu (and his wife). Now even this does not help. The pressure is too strong.

The investigations may drag on for another few months, but the end seems certain: State of Israel v. Binyamin Netanyahu will go to court.

WHEN A member of the government is indicted for a felony, they usually resign, or at least take leave of absence. Not Netanyahu. No sir!

If he resigned, who would guard Israel and save it from the numerous dreadful dangers threatening the state from all sides? The Iranians are promising our extinction, the evil Arabs all around want to kill us, the leftists and other traitors threaten the state from within. How can we survive without Bibi? The danger is too awful to contemplate!

Netanyahu seems to believe this himself. He, his wife and his eldest son behave like a royal family. They buy without paying, travel as guests of others, receive expensive gifts as a matter of course.

Popular humor accompanies all these transgressions. The police have entered this spirit and decorated his files with many zeros.

File 1,000 concerns the gifts. The Netanyahus are surrounded by a crowd of billionaires, who compete with each other in presenting gifts. Many jokes were made about the expensive cigars and pink champagne given to the family -- until it transpired that their value amounts to tens of thousands of dollars. And the donors expect something in return from the donees.

File 2,000 concerns a peculiar matter. Yedioth Ahronoth ("Latest News") was Israel's largest daily newspaper, until Israel Hayom ("Israel Today") appeared -- a paper distributed for nothing. It was founded by Sheldon Adelson, an admirer of Netanyahu and the owner of huge casinos in Las Vegas and Macao. It is devoted to the single task of glorifying King Bibi. In a recorded private conversation, Netanyahu offered Noni Moses, the owner of Yedioth, a deal: Israel Today would reduce its size and circulation if Yedioth started to glorify Bibi. Legally, this may amount to bribery.

And then there is File 3,000, deep beneath the sea. The German shipbuilder ThyssenKrupp (two names well remembered as Hitler's weapons suppliers) builds our submarines. Three, six, nine. The sky -- or the sea -- is the limit.

Related Topic(s): Benjamin Netanyahu; Investigations; Israel; Knesset; Money, Add Tags
Add to My Group(s)
Go To Commenting
The views expressed herein are the sole responsibility of the author and do not necessarily reflect those of this website or its editors.