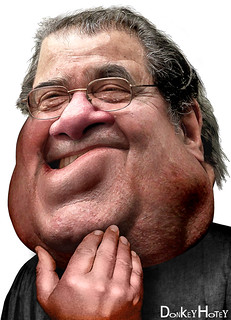 If there is any lingering doubt about whether Supreme Court Justice Antonin Scalia is really a political hack in robes, and in no way a real judge, it appears that such doubt should be dispelled in the coming months.

I say that because of what seems to be true about him and this case just argued before the Court to try once again to demolish Obamacare.

These two things are reported to be true:

1) Scalia is the author of a whole book on how statutes should be read. In it, he argues (according to several accounts I've read -- I haven't read the book itself) that a statute should be read in terms of the statute as a whole.

2) Apparently the signs are reasonably clear that Scalia is going to completely ignore the principles that he propounded in that book in order to strike against Obamacare. That means, he's ready to allow four ill-chosen words trump the clear intent of the other many hundreds of pages in the statute. Why let principles stand in the way of getting the political victory he desires for his side?

(Almost his whole record suggests that "his side" is the corporatist plutocracy that's already gone a long way toward seizing power from the people.)

Scalia, of course, has tortured the law before in order to serve the interests of the plutocracy.

He perverted the law in Bush v Gore. He did it in Citizens United and the McCutcheon case. And in a host of other cases: Scalia finds consistently in favor of the corporatist system, and against the power of government to be used to protect the less powerful.

Andy Schmookler, an award-winning author, political commentator, radio talk-show host, and teacher, was the Democratic nominee for Congress from Virginia's 6th District. His new book -- written to have an impact on the central political battle of our time -- is
Related Topic(s): Justice Antonin Scalia; Obamacare; Supreme Court Hypocrisy; Supreme Court SCOTUS; Supreme Court SCOTUS, Add Tags
Add to My Group(s)
Go To Commenting
The views expressed herein are the sole responsibility of the author and do not necessarily reflect those of this website or its editors.