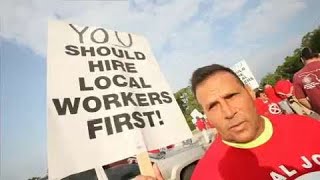 Unions have been on the defensive for most of the last four decades and it only seemed things were going to keep getting worse. Right-wing business groups have been pursuing every conceivable channel to weaken the power of unions.

They have long recognized that unions not only boost the pay of the workers they represent, but they have been the backbone of most major progressive economic initiatives, including Social Security, Medicare, the civil rights legislation of the 1960s, and recent efforts to raise the minimum wage and require paid family leave and sick days. For this reason, the right has done everything it could to weaken the power of the labor movement.

Also, the right has had many recent anti-union successes, most notably the Supreme Court's ruling in the Janus case. This ruling barred governments from signing contracts that required all the workers who benefited from a union contract to share in the cost of union representation. Many states already prohibited such contracts for both public and private sector employees.

Missouri recently moved to join this list, passing so-called "right-to-work" legislation last spring. While right-to-work is a good name from the standpoint of the business lobby, it has nothing to do with reality.

Employers routinely impose all sorts of conditions on employment. They can require that workers greet customers with a fake smile and obsequious greeting. They can dictate their dress, and even require that they wear silly uniforms and ridiculous hats. If workers object to any of these conditions, they are told that they have the right to work somewhere else.

It is only when workers want to impose conditions on employment that somehow workers have a "right to work." The alleged concern for workers' rights is about one thing, and one thing only: weakening workers bargaining power. These are not people who give a damn about the rights of workers.

But the people of Missouri saw through the right-to-work charade. When the anti-union bill passed by Missouri's legislation was put to a vote last week, it lost by a two-to-one margin.

This was a striking vote, both given the timing of the election and also the politics of the state of Missouri. Missouri is far from a union stronghold. Just 8.7 percent of the state's workers belong to a union, compared to 10.7 percent nationwide.

The state is also solidly Republican, with a Republican governor and large Republican majorities in both houses of its legislature. It hasn't voted Democratic in a presidential election in more than two decades.

The Republicans also moved the ballot initiative to the middle of the summer rather than the fall. It was expected that this would reduce turnout, thereby dampening the prospects of having the law overturned. Nonetheless, at a time when Apple's stock valuation crossed $1 trillion and Jeff Bezos is worth $150 billion, Missourians decided that the rich did not need even more help.

It will be important to build on this victory to further strengthen the power of workers. As long as the Republicans control Congress, there will be no support for pro-worker measures at the national level. Furthermore, if Trump nominee Brett Kavanaugh is allowed on the Supreme Court, it will have an even more solidly anti-worker majority than it does today.

There are still many pro-worker policies that can be done at the state level. For example, states can pass laws requiring severance pay when employers dismiss long-term employees without cause. This both provides workers with security against layoffs and protection against firing for trying to organize a union. While firing workers for union activity is already against the law, the penalties are trivial.

In this same vein, states can pass laws that limit hours and require overtime pay for workers who put in more than 40 hours a week. This would just mimic federal legislation dating back 80 years, but since the Trump administration has little interest in enforcing laws protecting workers, it would allow progressive state governments to fill the gap.

Of course, macroeconomic factors will always be hugely important in determining workers bargaining power. If the Federal Reserve Board refrains from raising interest rates too much, the unemployment rate should continue to fall. This will allow workers to get more wage gains. A low unemployment environment should also be conducive to union organizing since workers need to have less fear of being fired.

Dr. Dean Baker is a macroeconomist and Co-Director of the Center for Economic and Policy Research in Washington, D.C. He previously worked as a senior economist at the Economic Policy Institute and an assistant professor at Bucknell University. (more...)
Related Topic(s): Anti-union; Employers; Legislation; Unemployment; Workers, Add Tags
Add to My Group(s)
Go To Commenting
The views expressed herein are the sole responsibility of the author and do not necessarily reflect those of this website or its editors.