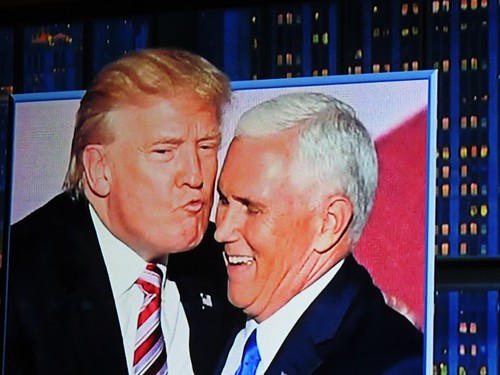 Because of the size and intensity of widespread public disapproval of Trump, which is unprecedented since the presidency of Richard Nixon, the odds favor the 2018 midterms following the pattern of elections in 2006, 2010 and 2014.

It is true that in the 2018 Senate elections, far more Democratic seats are in play than GOP seats, and that gerrymandering after the 2010 census gives Republicans an edge. But what makes wave elections different is that extremes in public opinion and extremes of voter intensity against incumbent presidents or parties override all other factors and lead to stunning upsets.

There will be an anti-Trump wave in 2018. The only question is whether it is a gigantic and titanic wave which, if current trends continue, as they probably will, is likely.

Words cannot fully express the magnitude of increased turnout from anti-Trump voters in 2018, many of whom feel continuing anger and rage about how Trump was elected with the support of a Russian dictator, after the grotesquely shameful intervention of the FBI director, followed by the attempt by Republicans to steal a Supreme Court seat by refusing to even consider the exceptionally qualified nominee of former President Obama.

Nor can words fully express the increased turnout that is coming in 2018 from anti-Trump voters who angry, alarmed and fearful of a president and Republican Congress who are taking the nation in a far different direction than most voters supported in 2016.

These voters are sickened and frightened by a president who foments racial and religious intolerance and calls political opponents and leading media the "enemies of the people," mirroring language used by foreign dictators, not American presidents.

The Trump base, which represents less than 40 percent of voters, is radically at odds with the rest of the nation.

Take ObamaCare. According to a new Marist poll, 60 percent of Americans want ObamaCare to remain as it is or become more progressive. Only 36 percent want ObamaCare repealed or made more conservative.

Take immigration, tax cuts for the wealthy, attacks against climate change science, deregulation of big banks, public education and attacks against Medicare, Social Security and consumer protection -- all issues where the majority stands with Democrats and against the Trump or GOP base.

Related Topic(s): 2018 Elections; Anti-trump; Issues; Republican; Wave, Add Tags
Add to My Group(s)
Go To Commenting
The views expressed herein are the sole responsibility of the author and do not necessarily reflect those of this website or its editors.