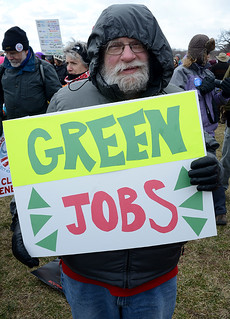 The fact that this even needs to be said demonstrates that there's been a breakdown in the democratic process, but we'll say it anyway: Our number one priority should be protecting the planet for future generations. That said, green energy makes sense even if we base our thinking on economic considerations alone.

Energy policies can roughly be divided into two kinds: those that benefit society as a whole, and those that only benefit the very few -- the Koch brothers and their ilk.

Guess which kind the GOP supports? Republicans are blocking pro-growth, job-creating green energy investments while pushing a pipeline that would enrich the few at the expense of the many -- with potentially disastrous environmental consequences.

If you want to know why, follow the money.

A new report from the Political Economy Research Institute and the Center for American Progress (the "PERI-CAP" report) offers a plan to bring the United States in line with an international emissions-reduction goal: 40 percent reduction of carbon dioxide emissions from 2005 levels by 2035.

You might call it the "99 percent plan," since its economic benefits would accrue to all income levels, and throughout the economy as a whole. The report, by Robert Pollin, Heidi Garrett-Peltier, James Heintz and Bracken Hendricks, makes the following key points:

- The plan would require annual public and private investment of approximately $200 billion per year.
-- The government share of that expenditure would average $55 billion per year, which is within the range of clean energy investments already made in recent years.
-- Total investment would be less than half that being spent by the oil and gas industry.

Of those annual investments, $90 billion would go toward raising the efficiency standards of buildings, transportation systems, and industrial equipment -- investments that would result in lower operating costs as well as a 30-percent reduction in energy consumption from current levels. As the report explains, most of these investments will be paid off after an average of three years. After that there would be net financial gains.

The remaining $110 billion per year would go toward renewable energy sources with low or zero emissions, increasing U.S. energy production -- and independence.

The report projects a net gain of 2.7 million jobs, at all income levels, for a decrease of 1.5 percent in the unemployment rate.

The Cost of Doing Nothing

Republicans are openly hostile to investments of this kind. If they succeed in blocking plans like this one from taking effect, we'll never see those 2.7 million jobs -- or the increases in middle-class income that would accompany a stronger labor market. We'll lose the net savings in energy costs (after making back the initial investment on an average three-year time frame) and the money that would be freed up for other kinds of spending.

If a plan like this isn't implemented as part of a global initiative -- one it could help set in motion -- we'll spend an estimated $1.5 trillion more every 10 years as the result of unchecked climate change. (That figure is based on a report from the White House Council of Economic Advisors, which estimated that a planetary temperature increase of 3 degrees Celsius above pre-industrial levels would result in $150 billion in economic damage every year -- in perpetuity.)

In short, even if we set aside our concerns for the future of the planet, the Republicans' obstructionist approach to green energy policy will cost our nation a great deal of money.

But wait: It gets worse.

When it comes to energy, Republicans aren't just sitting on their hands. They're also talking out of both sides of their mouths. They dismiss proposals like the PERI-CAP plan, which would create millions of jobs while promoting American independence. At the same time, they've been aggressively pushing the Keystone XL pipeline -- because, they claim, it will create jobs and improve America's energy independence.

Energy independence? The pipeline would ship dirty, sludge-like material from Canada to Texas, where it would be processed and refined -- most of it destined for sale to other nations, where it will do nothing to reduce prices at American gas pumps.

But, while the Keystone XL pipeline wouldn't create widespread prosperity, it would certainly do a lot to further enrich a very few people -- people who are already extraordinarily wealthy. The holders of Canadian mineral rights would make out extremely well, for example.

And who are some of those top leaseholders? Enter ... the Koch brothers. Contrary to right-wing denials, the Kochs have invested massively in Canadian tar sands. They may, in fact, be the largest leaseholders of Canadian tar sands of all. (They have obscured the exact figures through the use of intermediaries when buying up leases.)

Some reports have placed the Kochs' potential payday as high as $100 billion should the pipeline be built. While the exact figure isn't known, it's safe to say they'll make a great deal of money.

The rest of us aren't likely to fare so well. Although its supporters like to claim that the pipeline won't cost a dollar of public money, its funders would receive significant tax subsidies from Uncle Sam. Those subsidies would range from $1 billion to $1.8 billion, much of it destined for an oil industry that already receives an estimated $4 billion per year in undeserved tax breaks.

The pipeline would cost us in other ways, too, including the cost of future oil spills. An independent review of the potential for catastrophic spills, conducted at the University of Nebraska, reads like a series of disaster-film storylines. Based on past experience, the review forecasts 91 spills over the 50-year lifetime of the pipeline. (The Keystone 1 pipeline experienced 12 spills in its first year alone.)

How disastrous might such a spill become? The proposed pipeline would cross 1,904 waterways, including the Ogalalla Aquifer, which is the largest source of fresh water in the United States.

An observer described a spill from Keystone 1 this way: "It was just like the movies you used to see as a kid, when they'd strike oil and the geyser of oil shooting straight up in the air, with the plume on top."

Then there's the cost of climate change itself. The Keystone XL pipeline would increase carbon emissions so much that one study estimated it would be the equivalent of Americans driving an additional 60 billion miles every year.

But then, what do the Koch brothers care about carbon emissions? One Koch subsidiary alone is already responsible for five percent of the entire carbon footprint of the United States.

The Republican energy agenda is bad for most people, but it's very good for the Koch brothers and their associates. Coincidence? Hardly. As has been widely reported, the Kochs and their allies plan to spend nearly a billion dollars to influence the 2016 election. (The actual figure reported was $899 million, which has a discount-store, rounded down sort of quality to it: At least it's not $900 billion!)

Republicans tried to ram this Koch-friendly, pro-pipeline agenda through the Senate before breaking last week. According to Senate Democrats, they eventually shut down debate -- in part so that they could head to Palm Springs for a weekend retreat headed by ... the Koch brothers.

Of course, the Republicans might be acting out of sincerely held beliefs -- beliefs that just happen to contradict both environmental science and economic common sense. But somehow we don't think so.

All of this offers some important lessons. One is that green energy is redistributive, while fossil-fuel investments like the Keystone XL pipeline tend to reinforce inequality.

Another is that the deferred costs of bad energy policy -- whether they're based on a more unstable climate or future disasters -- can be hard for people to grasp. The pro-environment/pro-growth movement needs to do a better job of communicating these costs, and the benefits of good energy policy.

We're also learning that it's getting harder to defend our economic and environmental interests against the corrupting influence of campaign cash. The struggle for a fairer economy is inseparable from the struggle to protect the planet -- and both will be more successful once we've removed big money from our political process.

Until then, we'll have to keep fighting the Koch brothers' bought-and-paid-for Republican servants -- to protect our environment and our economy from projects like Keystone XL, and to promote smart proposals like the PERI-CAP plan.

Related Topic(s): Climate; Energy; Green Revolution; Jobs; Koch Brothers, Add Tags
Add to My Group(s)
Go To Commenting
The views expressed herein are the sole responsibility of the author and do not necessarily reflect those of this website or its editors.