The mass removal of Indigenous children from their parents continues unabated -- where is the outrage? 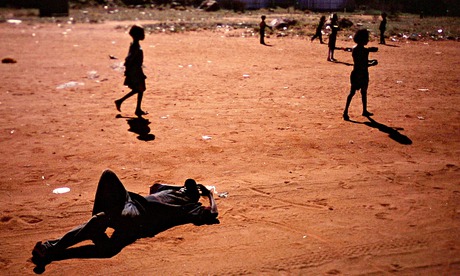 Copyrighted Image? DMCA
The tape is searing. There is the voice of an infant screaming as he is wrenched from his mother, who pleads, "There is nothing wrong with my baby. Why are you doing this to us? I would've been hung years ago, wouldn't I? Because [as an Aboriginal Australian] you're guilty before you're found innocent." The child's grandmother demands to know why "the stealing of our kids is happening all over again." A welfare official says, "I'm gunna take him, mate."

This happened to an Aboriginal family in outback New South Wales. It is happening across Australia in a scandalous and largely unrecognized abuse of human rights that evokes the infamous stolen generation of the last century. Up to the 1970s, thousands of mixed-race children were stolen from their mothers by welfare officials. The children were given to institutions as cheap or slave labor; many were abused.

Described by a chief protector of Aborigines as "breeding out the colour," the policy was known as assimilation. It was influenced by the same eugenics movement that inspired the Nazis. In 1997 a landmark report, Bringing Them Home, disclosed that as many 50,000 children and their mothers had endured "the humiliation, the degradation and sheer brutality of the act of forced separation ... the product of the deliberate, calculated policies of the state." The report called this genocide.

Assimilation remains Australian government policy in all but name. Euphemisms such as "reconciliation" and "Stronger Futures" cover similar social engineering and an enduring, insidious racism in the political elite, the bureaucracy and wider Australian society. When in 2008, prime minister Kevin Rudd apologized for the stolen generation, he added: "I want to be blunt about this. There will be no compensation." The Sydney Morning Herald congratulated Rudd on a "shrewd  maneuver" that "cleared away a piece of political wreckage in a way that responds to some of its own supporters' emotional needs, yet changes nothing."

Today, the theft of Aboriginal children -- including babies taken from the birth table -- is now more widespread than at any time during the last century. As of June last year, almost 14,000 Aboriginal children had been "removed." This is five times the number when Bringing Them Home was written. More than a third of all removed children are Aboriginal -- from 3% of the population. At the present rate, this mass removal of Aboriginal children will result in a stolen generation of more than 3,300 children in the Northern Territory alone.

Pat (not her real name) is the mother whose anguish was secretly recorded on a phone as four department of child services officials, and six police, descended on her home. On the tape an official claims they have come only for an "assessment." But two of the police officers, who knew Pat, told her they saw no risk to her child and warned her to "get out of here quick." Pat fled, cradling her infant, but the one-year-old was eventually seized without her knowing why. The next morning a police officer returned to apologize to her and said her baby should never have been taken away. Pat has no idea where her son is.

Once she was "invited" by officials to bring her children to "neutral" offices to discuss a "care plan." The doors were locked and officials seized the children, with one of the youngest dragging on a police officer's gun belt. Many Indigenous mothers are unaware of their legal rights. A secretive children's court has become notorious for rubber-stamping removals.

Most Aboriginal families live on the edge. Their life expectancy in towns a short flight from Sydney is as low as 37. Dickensian diseases are rife; Australia is the only developed country not to have eradicated trachoma, which blinds Aboriginal children.

Pat has both complied with and struggled bravely against a punitive bureaucracy that can remove children on hearsay. She has twice been acquitted of false charges, including "kidnapping" her own children. A psychologist has described her as a capable and good mother.

Josie Crawshaw, the former director of a respected families' support organization in Darwin, told me: "In remote areas, officials will go in with a plane in the early hours and fly the child thousands of kilometres from their community. There'll be no explanation, no support, and the child may be gone forever."

In 2012 the co-ordinator general of remote services for the Northern Territory, Olga Havnen, was sacked when she revealed that almost A$80m ($44m) was spent on the surveillance and removal of Aboriginal children compared with only A$500,000 ($275,000) on supporting the same impoverished families. She told me: "The primary reasons for removing children are welfare issues directly related to poverty and inequality. The impact is just horrendous because if they are not reunited within six months, it's likely they won't see each other again. If South Africa was doing this, there'd be an international outcry."

She and others with long experience I have interviewed have echoed the Bringing them Home report, which described an official "attitude" in Australia that regarded all Aboriginal people as "morally deficient." A department of family and community services spokesman said that most removed Indigenous children in New South Wales were placed with Indigenous carers. According to Indigenous support networks, this is a smokescreen; it does not mean families, and it is control by divisiveness that is the bureaucracy's real achievement.

I met a group of Aboriginal grandmothers, all survivors of the first stolen generation, all now with stolen grandchildren. "We live in a state of fear, again," they said. David Shoebridge, a state Greens MP, told me: "The truth is, there is a market among whites for these kids, especially babies."

The New South Wales parliament is soon to debate legislation that introduces forced adoption and "guardianship." Children under two years old will be liable -- without the mother's consent -- if "removed" for more than six months. For many Aboriginal mothers like Pat, it can take six months merely to make contact with their children. "It's setting up Aboriginal families to fail," said Shoebridge.

I asked Josie Crawshaw why. "The wilful ignorance in Australia about its first people has now become the kind of intolerance that gets to the point where you can smash an entire group of humanity and there is no fuss."

John Pilger grew up in Sydney, Australia. He has been a war correspondent, author and documentary film-maker. He is one of only two to win British journalism's highest award twice, for his work all over the world. On 1 November, he was awarded (more...)
Related Topic(s): Australian Politics; Children; Indigenous Cultures, Add Tags
Add to My Group(s)
Go To Commenting
The views expressed herein are the sole responsibility of the author and do not necessarily reflect those of this website or its editors.