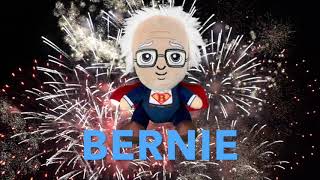 As people come to grips with the announcement today that Bernie Sanders has suspended, i.e. dropped out of, his campaign, a myriad of collective feelings will have to run their inevitable course.

My first reactions are that I feel profoundly let down. In the middle of Holy Week, for God's sake! While the virus is peaking and people are losing things right and left, how does it help that he does this now?

Bernie has always had terrible timing, a consequence of having bad advisors from the beginning. He always seemed to be reluctant to agree to anything people were crying out for him to say, especially to stop calling Biden a 'good and decent' man, his good friend, Joe Biden, the party's only remaining nominee: an old man with a credible sexual assault allegation recently come to light; a serial plagiarist, a promoter of the worst policies the centrists had to offer.

Let me put this in clear terms: Joe Biden, the Democratic Party choice for President- a man with diminished mental capacities, is going against one of the most ruthless contenders in Presidential history, Donald J. Trump. On Bernie's watch, and with his participation by concession, the Democratic Party will be utterly destroyed in November, and will have richly deserved it.

Bernie would also not fight back against Warren and her outrageous sexism charge. He wanted his kindly reputation to endure in a campaign that was not supposed to be about him.

In the end, this campaign was all about Bernie. This may not sound very charitable. I could not believe however, that there were no admissions of any missteps in his concession speech. No mention that he could have done more to address the concerns of many people.

For instance, although he said he was inclusive, he did not pay any particular regard to those not in the minority segments or youth age brackets that he was trying to romance. He would not stray from the talking points hammered into our brains, trying to burn a legacy into place, to make the case that he was the originator of these ideas, and, in my view, trying a little too hard to rewrite history.

His last speech as a contender showed him once more taking credit for these ideas becoming mainstream. Although he clearly was a defender, or at least a constant repeater of these ideas, was he helping "build a movement" by stamping his brand all over them? The progressive ideas that he embraced did not belong to him. Occupy was involved in income inequality long before Bernie hitched his wagon to that star.

Bernie did not come up with a tax on speculation on Wall Street (an idea that I supported in my run as an Independent from Maine for US Senate in 2008). It actually came from James Tobin, an economist who won the Nobel Prize. Tobin originated the concept of the STT (Securities Transaction Tax), which would be an optimal way to fight back against the tax breaks and cuts that Congress has showered on the rich for several decades. https://www.nobelprize.org/prizes/economic-sciences/1981/press-release/]

The fight for minimum wage has been a progressive effort since I was young, hardly a new idea. Not a Sanders idea, although to be fair, he has strongly endorsed the idea for a long time. The same goes for single payer, or healthcare for all. Others, notably Physicians for a National Health Plan (PNHP) have fought these fights on behalf of the progressive cause.

Bernie adopted those ideas into the progressive platform he ran on. The need was evident, but the ideas are not new and are not his alone. Maybe he has fought for these things in the Senate, and as an Independent from Vermont, which would be a reasonable thing to do to stay in power, since they are among the most popular ideas for change in the country.

I am not impressed that Bernie could not summon the willpower to respond to the efforts of those who wanted him to go to battle. I wrote many columns trying to appeal to him to suit up. I attended ten of his campaign events in New Hampshire this time out and wrote and made videos to support his efforts from the beginning of this second campaign. I have tried to reach the campaign to no avail, to urge them to heighten their response and sharpen their attack on substandard candidates' ideas.

Related Topic(s): Joe Biden; Joe Biden Cognitive Decline Swept Under The Rug; Primaries; Sanders-Bernard, Add Tags
Add to My Group(s)
Go To Commenting
The views expressed herein are the sole responsibility of the author and do not necessarily reflect those of this website or its editors.