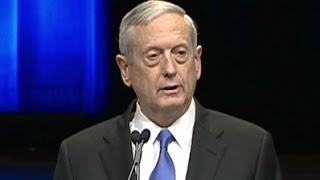 It's never boring, eh Truthseekers? It's a carnival fun house. A merry-go-round of cabinet members and senior staff. Personal lawyers and White House Counsel spinning on a Ferris wheel -- stopping and starting and dangling. And there is no permanent Attorney General. But the Very Stable Genius tells us that all is well. Oh, and we're pulling our troops from Syria and maybe Afghanistan. And there will be a government shutdown since the toddler wants his wall.

But hey, we can say "Merry Christmas!"

General Mattis wrote a pointed resignation letter, stating that he and Trump did not share the same foreign policy view and objectives. For example, Mattis believes we should respect our allies and NATO partners and maintain our global standing as a symbol of democracy. Whereas Trump cuddles up to dictators and murderers, insults our allies, and weakens respect for our nation overseas. There's just no philosophical agreement there, it seems. Probably because Trump is a psychopath.

Mattis wrongfully assumed Trump would listen to the 40+ year veteran generals on his staff and take their counsel and advice. But that would require a sane mind. What normal person would work for Trump?

Even a super patriot who wants to save America from The Donald can only challenge the madness for so long. Tariff Man does not attract the best and the brightest to his side, after all. More like the crooked and racist.

Who knows what slimy creatures will get coughed up out of the swamp and thrust upon us next. Maybe even a Newt.

Kathy never expected a career in radio as a talk show producer. Born and raised in Atlanta, Georgia, Kathy was completing her nursing degree when in 2001 - in an emergency - she was asked to fill in as the producer of Mike's program. Within a few (more...)
Related Topic(s): Allies; General James Mattis; Generals; Resignation; Staff; Syria, Add Tags
Add to My Group(s)
Go To Commenting
The views expressed herein are the sole responsibility of the author and do not necessarily reflect those of this website or its editors.