Apparently, COVID-19 is not the only health-care issue where Trump missed an opportunity to use the bully pulpit of the presidency to save lives. To find colorectal cancer early and increase the chance of survival the CDC "recommends that adults age 45 to 75 be screened." When it came time for Trump to undergo a colonoscopy as part of his physical, he could have used the opportunity to set an example and urge others to undergo the procedure. Instead, he went to the hospital under a cloak of secrecy. Apparently, he was afraid that if the information were publicly released he would become the "butt of a joke".

Adding to the intrigue of what should have been a routine medical procedure, Trump reportedly refused to go under anesthesia in order to avoid handing "power over to [his Vice President,] Mike Pence". Apparently, his mistrust of Pence existed long before January 6. 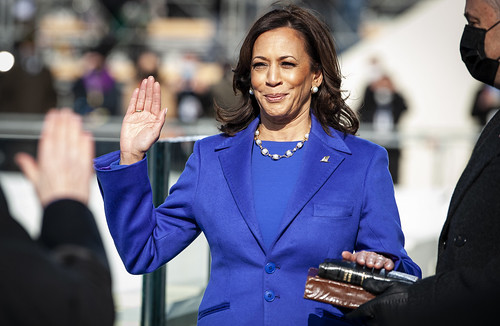 Kamala Harris
(Image by US Department of State)   Details   DMCA

One of the positive effects of the Biden presidency has been a return to what is considered normal behavior by a Commander In Chief. As an example, Biden's recent colonoscopy was not only publicly announced in advance, but he also took the steps necessary to ensure that the responsibilities of the presidency were left in capable hands. Hence, Kamala Harris became the first woman in our country's 245-year history to officially assume the powers of the presidency, if only for a short amount of time.

The first question we should all be asking is "what took so long?" Of course, it does not help that our Founding FATHERS took the statement that "All MEN are created equal" literally. Still, women have had the right to vote for 101 years. Contrary to their "minority" status, they actually slightly outnumber males. All of our daughters should know that they have the same claim to the reins of power as their brothers.

Related Topic(s): Kamala Harris, Add Tags
Add to My Group(s)
Go To Commenting
The views expressed herein are the sole responsibility of the author and do not necessarily reflect those of this website or its editors.