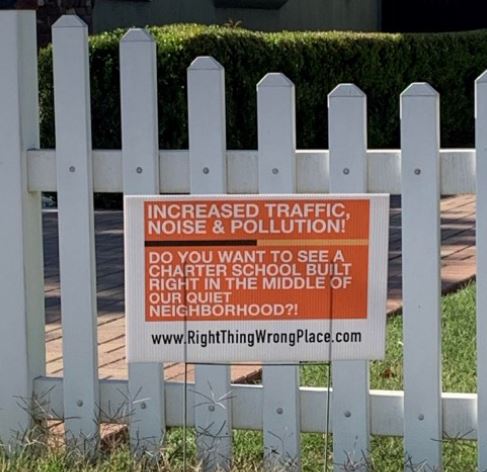 "We believe that the GALS Transportation Assessment is invalid. GALS did not use [the] proper methodology in calculating the traffic impact to determine if the project meets the criteria to qualify for the important CEQA (California Environmental Quality Act) exemption." - Right Thing Wrong Place

As I drove across Tyrone Street into this quiet neighborhood in Van Nuys, I immediately noticed how confining the street is. While Valerio Street had been marked in the center with a double yellow line, that disappeared just after the traffic light leaving no dividing line between east and westbound traffic. With no room to park on the street, cars were pulled up onto properties where a sidewalk would normally be placed. I slowed down to find the address of the lot where the Girls Athletic Leadership charter school wants to build a two-story building and a car coming in the opposite direction attempted to make a u-turn. The driver had to maneuver back and forth a couple of times on the narrow street.

The lot at 14203 Valerio Street is easy to find as it sticks out like a sore thumb. In a neighborhood of well-manicured lawns, this one is filled with junk and tarps. The trees that are not overgrown are dead. I imagine the Munster's house sitting in this spot with dark storm clouds only producing rain for the single lot.

What is harder to conceive is how a middle-school building housing hundreds of children and an "outdoor track, food pavilion and parking lot" will fit in this space. Unlike traditional school campuses with lots of room, this project will replace "an existing single-family residence" with three bedrooms and two bathrooms. The sleek, modern-looking building, which will be constructed with recycled shipping containers, will look out of place on a block full of single-family homes built decades ago.

As I parked my car and walked around the neighborhood, I tried to figure out how the new school would affect pedestrians in the neighborhood. The sidewalk is sporadic, existing in front of some houses and then suddenly ending. Cars and other obstacles often forced me into the narrow street.

As a father of five, I am a veteran of school drop-offs and I know how chaotic they can be. These streets were designed for residential use, not the entrance to a school facility. Once GALS opens, they will be clogged twice a day with impatient parents trying to get their children to school on their way to and from work, increasing the hazard for pedestrians as they weave in and out of the street. Some parents will try to save precious time by dropping their children off on Tyrone or Hazeltine and have them walk the rest of the way, further increasing the pedestrian traffic. The school says that they will rely on volunteers to help direct the traffic, but without a mechanism for requiring parents to volunteer their time, this no-fee workforce is not guaranteed. 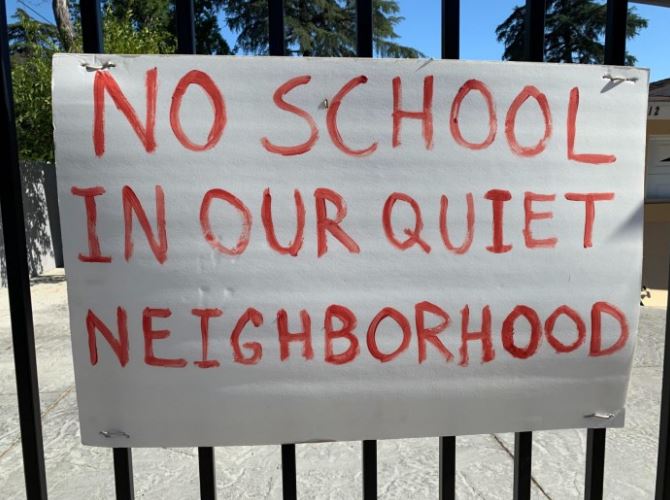 These traffic hazards should have been addressed in in-depth studies, but like the KIPP school in Cudahy that is being built on a toxic-waste site, a California Environmental Quality Act (CEQA) study was not required. Instead of having an independent traffic study that would have exposed the obvious traffic hazards, the school was able to commission its survey. Hiring high-priced lobbyists ensured that city officials did not look too closely at their plans. These lobbying activities included contacting members of the Van Nuys Neighborhood Council and orchestrating a violation of the Brown Act so that the City Attorney's office forced some members to recuse themselves. This prevented the council from achieving a quorum and eliminated the possibility of them officially weighing in on the matter. The remaining members of the council voted unanimously in a non-binding vote to oppose the project.

This project provides another example of how the charter-school industry uses its funding from organizations like the Walton Family Foundation to influence politicians and ensure that their schools are not held accountable for their actions. This has allowed charter schools to avoid the earthquake-safety regulations that public schools follow. Granada Hills Charter School has used this lack of oversight to allegedly bypass the requirements for asbestos abatement and to allow past building-code violations to go uncorrected. The North Valley Military Institute took advantage of a weak Charter School Division to avoid disclosing to parents on the campus where it is co-located about a lawsuit that claimed that an administrator had sexually assaulted students. GALS will build in Van Nuys and KIPP continues with its project in Cudahy despite obvious risks to student safety.

Holding charter schools accountable is no longer about simply protecting scarce education funding from being wasted due to fraud. The health and safety of students and residents surrounding these schools are being put in jeopardy by a system that coats the pockets of politicians who then look the other way when it comes to charter oversight.

"Carl Petersen is a parent, an advocate for students with special education needs, an elected member of the Northridge East Neighborhood Council, a member of the LAUSD's CAC, and was a Green Party candidate in LAUSD's District 2 School Board race. During the campaign, the Network for Public Education (NPE) Action endorsed him, and Dr. Diane Ravitch called him a "strong supporter of public schools." For links to his blogs, please visit www.ChangeTheLAUSD.com. Opinions are his own.