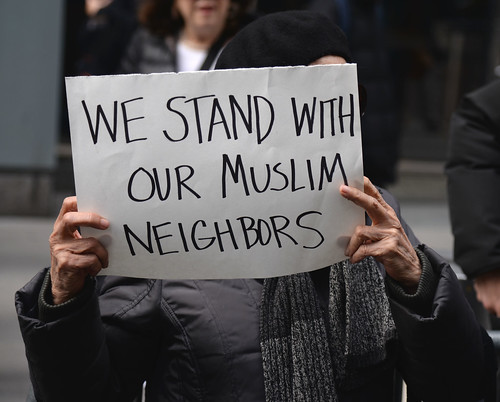 * Muslim NJ mayor detained at JFK airport: 'Did you meet with terrorists?'

The Muslim Mayor of Prospect Park, N.J., Mohamed Khairullah, was profiled for hours at JFK International Airport in New York and questioned due to being Muslim by Customs and Border Protection (CBP) agents. He was questioned about his travels overseas and specifically whether he visited any "terrorist cells" or met with any "terrorists. (Sept 13)

* Flight of two Muslims canceled because crew 'didn't feel comfortable' flying with them
American Airlines flight of two Dallas-area Muslim men was canceled because the crew "didn't feel comfortable" after they waved to one another boarding a flight from Birmingham to DFW International Airport. Abderraoof Alkhawaldeh, a motivational speaker from Irving, and Dallas nonprofit leader Issam Abdallah said when they got off, they said they were trailed by law enforcement officers, interviewed by an FBI agent and had their bags searched again. (Sept 19)

The California chapter of the Council on American-Islamic Relations (CAIR-CA) in October published a new report documenting faith-based bullying and discrimination of Muslim students in California schools. The report reveals that Muslim students are bullied at more than twice the rate of the national statistic. According to the responses received for the new report, 40% of respondents reported being bullied for being Muslim, which is double the national statistic for students being targets of school bullying. (Oct 16)

These stories symbolize the dilemma of the seven-million American Muslim community which remains at the receiving end with President Trump's demonization of Muslims to bigotry, to hate crimes, to widespread discrimination, to media coverage that links Islam with terrorism.

Tellingly, attack on Muslims and their faith is coming from our top political leadership. I mean from our President. Yes, our President Donald Trump.

On July 14, President Trump sent three racist tweets against four Democrat congresswomen saying "go back and help fix" the countries he said they "originally came" from before trying to make legislative changes in the USA. Two of the congresswomen were Muslim, Rep. Rashida Tlaib of Michigan and Rep. Ilham Omar of Minnesota. The other two Alexandria Ocasio-Cortez of New York and Ayanna Pressley of Massachusetts are of African-American background.

President Trump at a campaign rally on July 18 doubled down on his racist remarks about the four progressive congresswomen of color, casting them as an existential threat to modern American society and saying "let them leave." As he took direct aim at Democratic Rep. Ilhan Omar, a defiant Mr. Trump was buoyed by the raucous crowd, which chanted "send her back!"

Interestingly, the president claimed that the four Democratic congresswomen "originally came" from foreign countries but only Omar was born outside the U.S. Pressley, an African American, was born in Ohio. Ocasio-Cortez, of Puerto Rican heritage, was born in New York. Tlaib, the daughter of Palestinian immigrants, was born in Detroit. Omar, a naturalized U.S. citizen, was born in Somalia, a country she and her family fled from because of a civil war and ethnic strife.

Discrimination against Muslims and hate crimes

The Council on American-Islamic Relations (CAIR), the nation's largest Muslim civil rights and advocacy organization, reported over 500 incidences of anti-Muslim bias or harassment just till May. Amid Trump's Islamophobic and racist rhetoric Pew Research Center reported sharp rise in discrimination against Muslims. According to the Pews Survey released in April, Muslims, in particular, are seen as facing more discrimination than other groups in society.

In October, the CAIR-NY filed a federal discrimination complaint on behalf of Sudanese Muslim engineer against International Design Services, Inc. (IDS) for racial, religious and national origin discrimination and the creation of a hostile work environment. According to the complaint, the Muslim employee was subjected to months long pattern of harassment, intimidation, proselytizing, and threats. The Muslim worker was subjected to a "bootcamp" training program designed to harass him. His supervisor regularly yelled at and make physical and verbal threats and demeaning comments.

On the other hand, Washington-base Institute for Social Policy and Understanding (ISPU) annual poll also found that Muslims remain the most likely group to report experiencing religious discrimination.