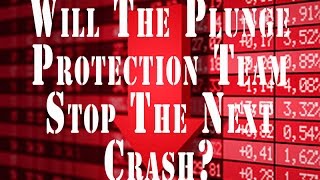 After the extraordinary sudden loss in equity values, today (2-6-18) brought gains back to the stock indices.

What happened? Did the market sneeze, cough, or was something misread and today perceived in a different light?

In my opinion this is what happened:

The Plunge Protection Team, as they have done on previous equity market drops, or the Federal Reserve operating for the Working Group on Financial Markets, sent a purchase order for S&P futures to the trading floor. The hedge funds, seeing the incoming bid, front-ran the bid by stepping in and buying S&P futures. This pushed the market back up, ended the correction, and prevented financial panic.

The Plunge Protection Team was created in 1987, approaching the end of the Reagan administration, in order to prevent a market correction from costing George H. W. Bush the presidential election as Reagan's successor. The Republican Establishment was desperate to reestablish its control over the party. The Republican Establishment, convinced by Wall Street that the Reagan tax cut would result in high inflation, found themselves instead confronted with a long economic expansion. In those days that meant that the expansion could be nearing its end, and a stock market correction could deny the presidency to George H.W. Bush.

To prevent any such correction, the US Treasury and Federal Reserve created a "working group" to intervene in the stock market in order to support values. Whenever the market starts to drop, the team purchases S&P futures which halts the market decline.

We have witnessed this on several occasions. And, most likely, again today.

How long can the fraudulent valuation of equities continue? My sometimes coauthor Dave Kranzler and I think it can continue until the dollar as reserve currency comes under attack. Neither of us believed that the fraud could be perpetrated this long.

The two other world powers, Russia and China, are moving away from use of the US dollar, but the consequence for the dollar could still be in the future. In the meantime, liquidity supplied by central banks and the interventions of the Plunge Protection Team could send equity prices higher.

Related Topic(s): Decline; Economic; Markets; Money; Plunge Protection Team, Add Tags
Add to My Group(s)
Go To Commenting
The views expressed herein are the sole responsibility of the author and do not necessarily reflect those of this website or its editors.