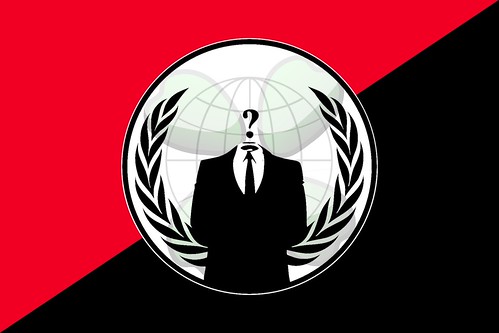 Anonymous, the hacktivist group known for supporting WikiLeaks and mounting actions in cyberspace in defense of freedom of information and transparency, launched "#BlackMonday" at midnight. Emails between an Anonymous user and an employee with Balboa Insurance, whose work is connected to the operations of Bank of America, were posted.

The employee claims to have worked for the company for the last seven years. He writes, "Many of you do not know who Balboa Insurance Group (soon to be rebranded as QBE First by Australian Reinsurance Company QBE according to internal communication sent to all Balboa associates) is, but if you've ever had a loan for an automobile, farm equipment, mobile home, or residential or commercial property, we knew you. In fact, we probably charged you money"a lot of money"for insurance you didn't even need."

Emails from the employee allegedly affirm suspicions that banks like Bank of America have been engaged in rampant fraud. But, the bigger story here is Anonymous has made contact with an employee at Balboa Insurance and opened up a conduit for getting information out to the world. He appears intent to push others to blow the whistle of Bank of America fraud.

In an email sent on March 11, 2011 at 7:06 pm, the Balboa Insurance employee writes about a key strategic issue that Anonymous faces in its campaign to take down Bank of America for its disingenuous and fraudulent dealings (particularly a campaign that began when the bank announced it would cease to process donations to WikiLeaks).

The employee describes only having emails that focus around a core group of managers. He suggests the emails only "drive the nail into 1 of the hydra's many heads" and that "Bank of America knows damage control." He goes on to write, "All you have to do after bringing the one story to light is create an avenue for everyone else to start doing what I did. Once employees see that they can be successful at it, you won't just have a stronger axe to cut off 1 head"you'll have 1000 axes aimed at all of the heads."

It is clear the employee has followed the operations of Anonymous closely. Continuing the hydra metaphor, he notes that, while HBGary Federal had a "handful of people" destroyed, a head will grow in place of where those people used to be and be smarter and faster.

The employee is prepared to work with Anonymous to get in touch with others, who can share emails or evidence of criminal conduct. He writes in an email what he thinks of Bank of America is that it is "a faceless corporation but it is managed and operated by real people like you and I. These people are scared because the Bank of America family is the only safe place they know. Some of them are bad, but some of them are good people that don't even realize what they're involved in is wrong. They're bombarded with corporate brainwashing on a daily basis and never told the full story. They're encouraged to ignore the media and only listen to official Bank of America internal emails for legitimate news."

When told Anonymous is can help others tell their story, he reacts, "Don't hold your breath. These people are conditioned to take orders and not think about anything. Nobody works at BofA because they grew up dreaming to work there. They work there because they're too scared to stand on their own in this world and want to be protected by the corporate family."

"This place is run like a cult," writes the employee. It is clear that he is significantly appalled with Bank of America. And, he pleads with Anonymous to encourage those within Anonymous to listen to other employees' stories and take them seriously "no matter where they are on the corporate ladder." He urges Anonymous to "encourage them to take a stand against what they know is wrong. Let them know the BofA way of life is not the only way of life. Give them a voice. What you'll find when you do that will amaze you."

An operations manager sends the following:

Kevin Gosztola is managing editor of Shadowproof Press. He also produces and co-hosts the weekly podcast, "Unauthorized Disclosure." He was an editor for OpEdNews.com
Related Topic(s): Anonymous; Bank-of-america; Fraud; Information; Loan Modification; Mortgage Restructuring; Transparency; Whistleblowers-ing; Wikileaks, Add Tags
Add to My Group(s)
Go To Commenting
The views expressed herein are the sole responsibility of the author and do not necessarily reflect those of this website or its editors.