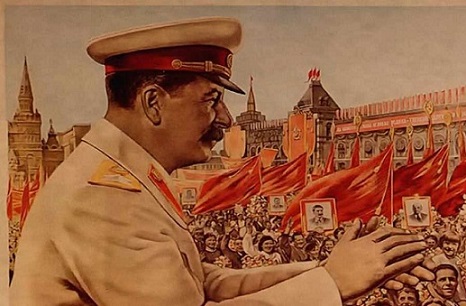 Does this look like Nazi propaganda?
(Image by fineartamerica.com/)   Details   DMCA

The two most celebrated leftist literary figures of the 1930s--40s, George Orwell (1903--1950) and Arthur Koestler (1905--1983), lived through the 20th century's revolutionary times as documentarists. They were on the front lines as journalists in the Spanish civil war, came close to death there and in WWII, and then wrote their explosive novels dissecting the communist experience from the inside.

Orwell never joined any party, let alone the Communist Party of Great Britain, but was inspired to go to Spain to fight fascism, and was condemned when he returned to Britain in 1937 for having joined the Trotskyist POUM (Partido Obrero de UnificaciÃ³n Marxista) to fight Franco. His brush with both fascist snipers and Stalinist enemies led him to write Animal Farm and 1984, after which he died of TB, before he could witness what was done with his works.

Koestler joined the German Communist Party in 1931, 'saw the light' by 1934 as his friends started being arrested in Moscow, but stuck it out until 1938, writing Darkness at Noon, becoming the toast of post-WWII western Cold War intellectuals (and the CIA). Diagnosed with terminal cancer, he eventually committed suicide with his wife in 1983.

Though K was the one to survive and revel in his instant fame and wealth, openly supporting imperialism in the Cold War, it is Orwell who lives on in the world of images, his less pretentious expose of totalitarianism adapting itself to the post-communist world as a critique of authoritarianism and the military-industrial complex.

They are a study in contrasts, Orwell passionate, undisciplined, Koestler cold, rational, disciplined. They became friends during the last years of Orwell's life.

Their classics, Animal Farm (1945) and 1984 (1949) vs Darkness at Noon (1940), all of them written in the heat of WWII, couldn't be more different. Orwell's colourful, if gloomy, social parables, were both successfully adapted more than once for the screen.

Darkness at Noon never attracted any film offers. However, it is the first notable work equating Hitler and Stalin as totalitarian dictators, and became the bible of the post-WWII Cold War. Prisoners in some nameless totalitarian country (but the protagonist Rubashov, is Russian, i.e., Soviet), sentenced to death.

Guilty not of crimes for which they are going to die. Guilty for placing the interests of mankind above man, sacrificed morality to expediency, means to ends.

*save their necks (Radek),

The first three were convinced by torture and blackmail. The latter were convinced by appealing to their desire to preserve the revolution at all costs. Rubashov agrees readily to total self-abasement. Interrogator: Comrad Rubashov, I hope that you have understood the task which the Party has set you.

Related Topic(s): Belief; Betrayal; Capitalism; Expose; France; Heroes; Hitler; Memoir; Peace; Spies; (more...) Stalin; Suicide, Add Tags  (less...)
Add to My Group(s)
Go To Commenting
The views expressed herein are the sole responsibility of the author and do not necessarily reflect those of this website or its editors.